Plympton is a farming town situated in the central part of Plymouth County, about 30 miles southeast of Boston; and has as boundaries Kingston on the northeast, Carver on the south, Middleborough on the southwest and Halifax on the northwest. The assessed area is 8,407 acres.

Plympton, the post-office and central village, is pleasantly situated on a commanding eminence; and Winetuxet village is upon a beautiful stream of the same name; which with its affluents flows through the southerly part of the town, and thence through Halifax into the Taunton River. The Plymouth Branch of the Old Colony Railroad has its Plympton station at the north village called "Silver Lake," situated on Jones River Pond. Silver Lake Grove, comprising nearly 30 acres of wooded land, on the border of the pond has been admirably fitted up for pleasure parties. South Plympton is the other village. There are in the town about 4,500 acres of forest, containing oak, maple, pitch pine, white pine and white cedar. It is recorded that within the memory of the present generation a white oak was cut here which contained seven tons of ship timber, and 2 cords of firewood.

There were 6 public school-houses, valued at some $3,000. The Young People's Library contains upwards of 300 volumes, and a Sunday-school library, 400. The Congregationalists have a church edifice here.

The Indian name of this locality was Wenatuxet. By the white people it was first called the "Western Precinct of Plymouth," and settlements were made as early as 1680; its incorporation as a town occurring June 4, 1707. It originally contained 55 square miles, but now has not quite 15. Carver was wholly formed from it, and another portion went to form Halifax. The church was organized in 1698, and the Rev. Isaac Loring was the first pastor. Deborah Sampson, who served three years in the Revolutionary army under the name of "Robert Shurtleff," was born here December 17, 1760. She was wounded at Tarrytown, and received a pension. After the war she married Benjamin Gannett, of Sharon. Her death occurred in 1827.

Ninety men from this town entered the service of the Union during the late war, and fifteen lost their lives in consequence. A Soldiers' and Sailors' Monument has this year been erected to their memory. Dr. William Bradford (1729-1808), U.S. senator from 1793 to 1797, was a native of this town. Rev. Henry M. Dexter, D.D., editor of "The Congregationalist," was born in Plympton, August 13,1821.

Visit Plympton, Massachusetts, USA
Discover the people who lived there, the places they visited and the stories they shared. 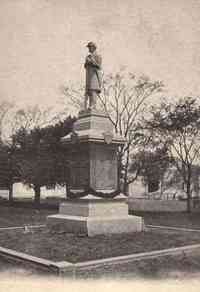