Groveland is a handsome town on the south bank of the Merrimack River, and in the northerly part of Essex County, 34 miles north of Boston, with which it connects by the Haverhill Branch of the Danvers and Newburyport line of the Boston and Maine Railroad. It is bounded on the north by Haverhill and West Newbury; on the northeast by the latter; on a small space at the east by Newbury; on the southeast and south by Georgetown; on a short southwestern line by the northern part of Boxford; and on the northwest line by Bradford and Haverhill. From the latter it is separated by the Merrimack, across which, at Groveland village, is an excellent iron bridge 800 feet in length.

The assessed area is 5,230 acres, which includes small scattered tracts of forest aggregating 1, 195 acres, and composed mostly of pine and oak. The surface is otherwise finely diversified with swelling eminences, fertile valleys and frequent ponds and streams. There are several points especially attractive, — as the grove on the Merrimack, Mount Ferry, Eagle Bluff, Father Ferry's Walk, old "Federal City," and Mutton Pie Swamp. The scenery on the banks of the Merrimack, which sweeps grandly along its northern side, is very beautiful. It is here a tidal stream, navigable for vessels of 200 tons, Salmon, shad and other fish are taken from its waters. Parker River, gathering its volume in two ponds in the eastern section of the town, flows eastward through Newbury into the ocean. In this section also is another small village. Johnson's Pond, a charming sheet of water in the western angle of the town containing about 300 acres, sends a tributary by a fall of sixty feet into the Merrimack River, affording power for the several factories in West Groveland Village. The manufactures of the town are chiefly woollen goods ("Groveland Mills" having three mills), employing some 400 persons; boots and shoes, employing nearly 300; also carriages, metallic goods, lumber, food preparations and materials for building.

Numerous elms and maples adorn the streets and diversify the landscape. The underlying rock is Merrimack schist and calcareous gneiss, with some rocks of slaty character and masses of metalliferous rock. The usual crops are cultivated; and the 133 farms, in 1885, reported an aggregate product reaching the value of $68,281. The valuation in 1888 was $877,555; with a tax-rate of $16 on $1,000. The population was 2,272,— an increase of 496 since 1870. The dwelling-houses numbered 396. The public schools are completely graded, and occupy eight buildings valued at $16,000. The churches are Congregational, Methodist, American Episcopal and Roman Catholic. A tasteful monument on the common commemorates the loss of the 24 soldiers lost from the 117 sent by the town into the war for the Union.

This town, originally the East Precinct of Bradford, was incorporated March 8, 1850; being named (it is supposed) from its beautiful groves of oak and maple.

The first church in the place was organized June 7, 1727; when the Rev. William Balch was ordained pastor.

Visit Groveland, Massachusetts, USA
Discover the people who lived there, the places they visited and the stories they shared. 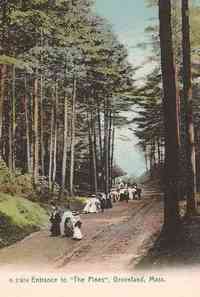