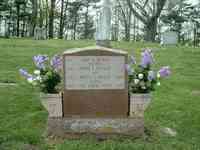 While looking for ancestors in a local cemetery, I came across a stone that read "The Great Reno (1890-1965)". I thought it was pretty funny that someone might have that on their gravestone. Knowing that some of my relatives had the last name "Renaud", I thought there might be a connection, so I took a picture of the stone.

Many months went by and the picture remained on my computer in the vast dumping ground of files that I would probably never do anything with. One day, a man named Roger Renaud introduced himself to me via email. He had been talking with my grandfather's cousin, Lionel, (see "I Met My Grandfather’s 93-year-old Cousin on the Internet"). Roger sent me a huge file with family history information about the Renaud family. Someone had clearly spent a great deal of time documenting this family. Some of the family members were my "Renaud" family. As I gazed upon the many branches of this Renaud family, I came across the "Great Reno". He was born in Southbridge, Massachusetts in 1890. By the time he was 16, he was performing in vaudeville as an acrobat. He went on to perform strong-man tasks as well as being an escape artist.

In 1914, he was arrested on the eve of his wedding. The headline in the Boston Journal dated January 8, 1914 read "Arrest Acrobat on the Eve of his Wedding - Southbridge Man Accused of Embezzling $1100 by Old Flame - Widow with nine children complains - Admits to writing love letters to acrobat while her husband was dying". For more details on the story, see article on the left.

I dug up the old photo from the depths of my hard drive, dusted it off, and created a page for Frank Xavier Renaud as a colorful member of my family tree.