1910 - OVER ONE THOUSAND HOUSES ARE BURNED - The Great Conflagration Campbellton, N.B.

All The Mills In Campbellton. The Largest Cedar Shingle Center In Eastern America, Destroyed —
American Capital Largely Interested—High Wind And Failure Of Water Main Makes It Impossible To Stay The Flames—Neighboring Forest Burning.

Dalhousie, N. B. (Special). - A waste of smoking ruins extending for two miles and seven isolated buildings represent the town of Campbellton and the nearby village of Richardsville, which were overwhelmed by fire driven before a gale. Two lives were lost during the hours the fire raged. Dr. Beverly Sproule, a dentist, while aiding with his automobile in rescuing women and children was burned to death by an exploison of gasoline. An infant was suffocated in the dense smoke.

Five thousand residents of Campbellton and 400 of Richardsville are homeless.

One thousand buildings in Campbellton and 75 in the village were destroyed...

Some semblance of order has been established and relief work was begun. During the day special train brought tents, food and other supplies and all who could not be accommodated in Dalhousie and in farming districts were quartered under canvas. Hundreds of persons lost all they possessed and it was a band of refugees who camped on the banks of the Restigouche.

Campbellton was the largest cedar shingle center in Eastern America. All the miils were destroyed, including the tie plants of the Shives Lumber Company, Richards Lumber Company and the Moffat Mills. The property cf these three concerns, in
which American capital was interested was valued at $300,000.

The fire started in the mills of The Richards Lumber Company, and fanned by a southwesterly gale, spread to all parts of the town. The
water mains failed at a critical time and even with aid sent from New Castle, Bathurst and Dalhousie, the Campbellton people were unable to make headway against the crush of the flames.

The fire was the greatest in New Brunswick since the destruction of a large part of St. John in 1877.

Visit Campbellton, New Brunswick, Canada
Discover the people who lived there, the places they visited and the stories they shared. 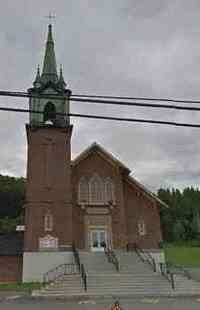