The Whiskey Rebellion (also known as the Whiskey Insurrection) was a tax protest in the United States beginning in 1791 during the presidency of George Washington. The so-called "whiskey tax" was the first tax imposed on a domestic product by the newly formed federal government. It became law in 1791, and was intended to generate revenue to help reduce the national debt. The tax applied to all distilled spirits, but whiskey was by far the most popular distilled beverage in the 18th-century U.S., so the excise became widely known as a "whiskey tax". The new excise was a part of U.S. treasury secretary Alexander Hamilton's program to pay war debt incurred during the American Revolutionary War...

Throughout counties in Western Pennsylvania, protesters used violence and intimidation to prevent federal officials from collecting the tax. Resistance came to a climax in July 1794, when a U.S. marshal arrived in western Pennsylvania to serve writs to distillers who had not paid the excise. The alarm was raised, and more than 500 armed men attacked the fortified home of tax inspector General John Neville.

Washington responded by sending peace commissioners to western Pennsylvania to negotiate with the rebels... The rebels all went home before the arrival of the army, and there was no confrontation. About 20 men were arrested, but all were later acquitted or pardoned...

The Whiskey Rebellion demonstrated that the new national government had the will and the ability to suppress violent resistance to its laws. The whiskey excise remained difficult to collect, however. The events contributed to the formation of political parties in the United States, a process already underway. The whiskey tax was repealed after Thomas Jefferson became President in 1801; his Republican Party, opposed Hamilton's Federalist Party.

Visit Washington, Pennsylvania, USA
Discover the people who lived there, the places they visited and the stories they shared. 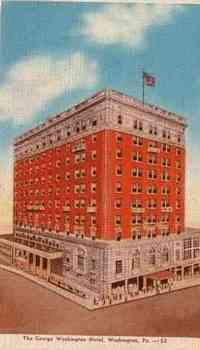