Strong is situated near the centre of the settled portion of Franklin County. It is bounded on the east by New Vineyard, south by Farmington, west by Temple and Avon, and north by Freeman. The dimensions of the territory are 7 miles from north to south and 5 from east to west in the northern half and three in the southern. Sandy River enters the town near the middle from the west, soon taking an almost right-angled turn southward through a valley in the range of mountains running from Weld through Avon, Strong and New Vineyard. The rocks are slate, granite, and mica-schist. The soil along the river is sandy loam, and clayey loam on the uplands, and is strong and fertile. The principal crops are hay, wheat, corn, oats and potatoes. Porter and Bates ponds are the principal sheets of water, the first being one and a half miles in length by three-fourths of a mile in width. The town is very hilly; Day’s Mountains, standing partly in Avon, being the highest elevation.

Strong village is nestled down among the hills just north of the bend in Sandy River, which is here crossed by an iron suspension bridge. The village contains several fine residences, and is one of the prettiest in the county. There are good powers on Sandy River, upon its northeast branch, and on the outlet of Porter’s Pond. On the last are a saw-mill and clover mill. At Strong village are a machine shop, boot and shoe factory, and that of the Sandy River Cheese Company, a manufactory of clothes-pins, cane-seat chair bottoms and excelsior. The village is situated on the Sandy River narrow gauge railroad from Farmington to Phillips.

The first settlements in Strong were made as early as 1784, by William Read, followed by Edward Flint, John Day, David and Joseph Humphrey, Jacob Sawyer, William Hiscock, Benjamin Dodge, Timothy Merry, Eliab Eaton, Peter Patterson, Robert McLeary, Jeremiah Burnham and a Mr. Ellsworth, all from Nobleborough, or its vicinity. Richard Clark and Joseph Kersey became residents about 1792. This township was purchased of the State of Massachusetts by an association, of whom William Read was one, and acted as their agent in the purchase and survey of the town. The inhabitants were for some years under the necessity of carrying their corn and grain to Winthrop to mill, or of using their mortars instead. This town claims to have been the birth-place of the Republican party.

A Gazetteer of the State of Maine, Geo. J. Varney Published by B. B. Russell, Boston 1886

Visit Strong, Maine, USA
Discover the people who lived there, the places they visited and the stories they shared. 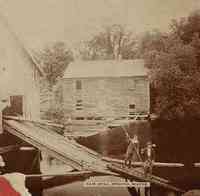 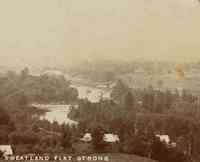