Loss Variously Estimated at From One to Four Millions.

City Helpless Till Navigation Can Be Resumed - People in a State of Panic After the Fire.

SEATTLE, Washington, May 21. - The long-expected catastrophe at Dawson has occurred, and three-fourths of the town lies in ashes, while hundreds of miners and shop keepers, gamblers and saloon men, are living in tents, sleeping on the snow in blankets, or moving up the creeks into the settlements at the mines.

Stark Humes, son of Mayor T. J. Humes of this city, brings a direct and circumstantial story of the loss. He arrived at Victoria this morning, and wires details of the story here.

According to Humes, a veritable panic reigned in Dawson the day after the fire, because hundreds of tons of provisions were burned up, and it will be at least five weeks before any considerable amount can be obtained from the outside.

An area of ground three-quarters of a mile long and four blocks in width was eaten over by the flames, leaving absolutely nothing but ashes. One hundred and eleven buildings were destroyed.

The Fire Department, so-called, was practically unable to cope with the conflagration. The firemen brought out the only engine, but the lack of all facilities for handling the apparatus, and of an insufficient water supply, made the efforts of the force of fire fighters almost ridiculous.

The heaviest losers by the fire are McLellan & McFeeley of Victoria and Vancouver, who had an immense stock of iron and tinware and miners' supplies, taken in at heavy expense, and the Bank of British North America, whose rather flimsy vault did not withstand the heat, the papers in it being destroyed. The band also lost a large amount of gold dust. A rough estimate places the loss in gold and paper money alone at $1,000,000.

Dawson's curse, its low women, caused the conflagration. This is the fourth fire that has resulted from a drunken debauch, in which the demi-monde of the place have figured. Twice before drunken women quarreling overturned lamps, and started fires that cost hundreds of thousands of dollars. This fire had its beginning in the same way, an apartment over a saloon being the scene of the first blaze. This was as 4 o'clock on the morning of April 21, according to Humes. A saloon adjoining McDonald's theatre, on the water front, was first consumed, and then the flames spread rapidly to the main buildings, and thence across Second Street into the very heart of the business section. Humes describes the incidents of the fire as some serious, others tragic, and some bordering on the grotesque.

The small shopkeepers and restaurants were the greatest sufferers. Some thought only of their stock of provisions. Others saved their hidden buckskin sacks of gold dust at the peril of their lives. As the flames ate their way up Second Street, the women of the disorderly houses fled before them, carrying their treasures. Many were scantily clad, and suffered much from the biting gale that blew from the river's edge.

Dawn found the conflagration unimpeded in its career of destruction, despite the fact that dozens of houses were blown up by giant powder. Martial law was declared by the mounted police, and the men were patrolling the burned district day and night. The owners of some of the ruins claimed that there was treasure beneath the ashes. Thieves were plentiful, and an improvised dungeon was reported full of accused persons when Humes and his companion left on their outward trip. Humes says:

"The fire is the worst that Dawson ever saw, but, notwithstanding that fact, there will be no material interruption in the work at the mines, for most of the mine owners had plenty of provisions stored in their cabins. The gambling houses, saloons, hotels, and restaurants are the greatest losers. There are some people at Dawson who will regret the fire because it has put a total stop to all forms of vice. Saloons that saved some of their goods were doing a great business, and the price of all drinks was doubled and sometimes trebled.

"In estimating the loss at $4,000,000 it must be remembered that an exaggerated value was doubtless placed on the property destroyed in many instances. For example, stores that would cost but a thousand dollars to build here are rated at $5,000 there on account of the high price of labor and material.

"The destruction of great quantities of provisions is the main incident of the fire. Fortunately a fairly early Spring is promised and barges and steamers laden with goods can be sent from the lakes above Skaguay. The merchants of that place were preparing to send rafts laded with supplies down the river as fast as the ice gave way."

Visit Dawson City, Yukon, Canada
Discover the people who lived there, the places they visited and the stories they shared. 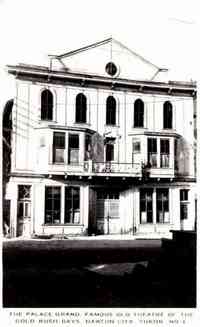