Broken Bones Were Received by the Men in the Car, but They Narrowly Escaped Death.

John H. Lewis, Kentucky and Hultig avenues, Mount Washington and George L. Sevedge, Sterling and Peery avenues, [illegible], narrowly escaped death about 7:15 o'clock this morning when the Ford sedan in which they were riding was struck and demolished by a Chicago & Alton passenger train, the Hummer, at Arlington avenue.

Mr. Lewis suffered a broken right arm in two places and cuts and bruises on the head and face. Mr. Sevedge a sprained back and probable fractures of ribs and both arms. They were taken to the Lewis home and were to be removed to Grace hospital.

Lewis and Sevedge are partners in the concrete contracting business and were on their way to work. They were in Lewis's car. He was driving.

Lewis was driving north on Arlington avenue, which slopes upward to the railroad tracks at that point. Lewis said it was raining. he said he heard no whistle and did not know the train was approaching. The train, westbound from Chicago, descends a grade from the southeast as it approaches the crossing.

When the train struck, Lewis said it knocked him fifty or sixty feet on the south side of the track. Sevedge was thrown out on the other side.

Pieces of the car, which was a total wreck, were scattered along the south side of the tracks for two hundred feet.

Visit Kansas City, Missouri, USA
Discover the people who lived there, the places they visited and the stories they shared. 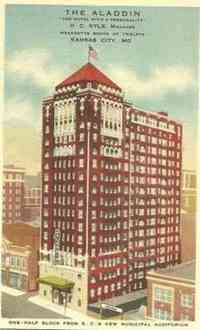