The story of Anne's husband is rather an interesting one. Originally he came to New France as a young Jesuit priest, who like many other zealots, wanted to put his life on the line in order to convert the Canadian people. So on June 26th, 1640; he handed over all of his wordly possessions, including land that he had inherited from his father; to his mother and sister and joined Father Rene Goupil on his mission to Quebec. Young Guillaume was intelligent and hard-working, and soon proved to be a valuable asset. His carpenter skills were put to good use in the construction of the Mission at Saint-Marie, and his willingness to learn and adapt, made him useful as an interpretor and diplomat.

He would also soon get his chance for martyrdom; when in 1642; after leaving Trois-Rivières with fathers Isaac Jogues and René Goupil; and 19 men from the Huron nation, was attacked by about 80 Iroquois soldiers in the vicinity of lake Saint-Pierre. Cousture would seal his fate when he shot and killed an Iroquois Chief.

Father Jogues describes what happened next: "Cousture, who had killed one of their chiefs in the combat, was exposed to their whole fury. They undressed him and beat him up with wooden sticks. They ripped out his fingernails with their teeth and stabbed a sword through his hand. One of the savages cut off half of his right middle finger. The pain was all the more unbearable since he did not use a knife, but a piece of shell. Since he could not cut the slippery nerve, the savage twisted it and pulled with such violence, that a nerve the length of the arm came out. The arm became prodigiously swollen."

As required by Iroquois tradition, Cousture was then sent to another village and given to the widow of the warrior he had killed, since only she could decide his fate. He was later adopted by the widow who treated him like a member of the tribe. She nursed him back to health and the young priest in training learned their language, culture, beliefs and traditions. He became such a valued member of the community that he was even invited to join the tribal council.

He returned to Trois Rivieres in 1645, accompanied by Iroquois Chief Kiotseaeton and a band of his followers; where they met with Governor Huault de Montmagny to negotiate a new peace. The residents were surprized to find Cousture alive and well, now dressing in Iroquois fashion. "As soon as he was recognized, everyone hugged him and he was looked upon as a resurrected man".

The peace would be short-lived when on October 18th 1646, fathers Jogues and Lalande, who had been sent as emissaries to the Iroquois, were massacred and negotiations were abruptly stopped. About that time, Cousture had asked to be relieved from his vows, so that he might marry an Iroquois woman, though it is not clear whether he ever followed through with the union. He eventually settled at Pointe-Levy in Lauzon Quebec with Anne, though he continued his diplomatic activities. 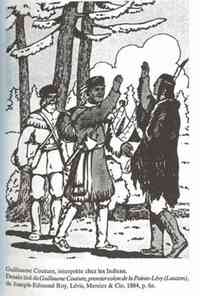 Visit Rouen, France
Discover the people who lived there, the places they visited and the stories they shared.