The wires last night announced the death of Ralph Waldo Emmerson, one of this country's most distinguished thinkers and writers, which took place at his residence in Boston after a brief illness. He was born in Boston, May 25th, 1803. He obtained his primary education in the public grammar schools, where he soon qualified himself for the Latin school. Here he attempted his first literary work, and produced some poems. In 1817 he entered Harvard College, where he graduated in 1821. He was not remarkable for his application to study as much as for his fondness for reading, and when he graduated he was noted for his knowledge of general literature.

After graduating he engaged in teaching for five years. In 1826 he was received as a preacher in the Middlesex Association of Ministers, but his health failing he spent the winter in South Carolina and Florida. In 1829 he was ordained as a minister of the Second Unitarian church of Boston. He came of clerical stock and for eight generations there had always been a clergyman in the family.

In 1830 he married Miss Tucker, of Boston, who died in February, 1831. In 1832 he withdrew from the second church on account of a difference of opinion on certain theological questions, and shortly after sailed for Europe, where he remained for nearly a year. On his return he engaged in lecturing, and for years afterwards devoted himself to the lecture platform, delivering quite a number and engaging at the same time in other literary work, embracing essays on various subjects, poems, &c. His writings became popular on account of the freedom with which he expressed his opinions, his originality of thought and happiness of expression, which gave him a front rank among the writers of this country and much influence in shaping the opinions of those who read and followed him in his writings. 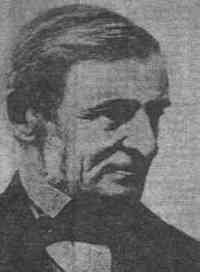