MENDON is situated at the south-easternmost extremity of the county of Worcester, and is the oldest town in it except Lancaster. It was incorporated May 15, 1667. It is 18 miles from Worcester, 34 from Boston, and 24 from Providence, R. I. It is 12 miles from the Worcester and Boston railroad at Westborough. Population in 1837, 3,657.

The face of the town is broken and hilly; the north part is the most fertile, producing large crops of hay and grain. This part of the township has also long been noted for its variety and abundance of winter apples. The south-westerly portion of the town is generally rough and stony, though there are some excellent farms in it. The south-easterly part is more level and sandy, and less fertile; the middle, hilly and thinly inhabited.

At a general court holden at Boston, Oct. 16, 1660, "in further answer to said Brantry petition, the court declare that they judge meete and proper to grant a plantation of eight miles square, and that the persons named have liberty to enter upon and make a. beginning thereat." This tract of eight miles square was afterwards purchased of the Indians, for the sum of "twenty fower pounds sterling," as set forth in a deed given by "Anawassanauk, alis John, Quashaamait, alis William of Blewe hills, Great John, Namsconont alis Peter, and Upannbohqueen, alis Jacob of Natick," to Moses Payn and Peter Brackett, "both of Brantre;" said deed bearing date April 22, 1662, and witnessed by John Elliot, Sen., John Elliot, Jr. and Daniel Weld, Sen.

At the time of the above grant the court also ordered "that Major Humphrey Atherton, Lieut. Roger Clap, Eliazur Lusher and Deacon Parke, or any three of them, shall be and are hereby impowered to make a valid act there." These gentlemen were denominated "the committee for Nipmug," which, it seems, was the original name of the town. Oct. 30, 1663, this committee ordered that all those persons who had been accepted to allotments of land in the plantation should remove there, with their families, by the middle of Nov. 1664, "upon penaltie of forfeituer of all their grants there."

At a general court held at Boston, May 15, 1667, the plantation of Nipmug, which was now called Quinshepauge, was incorporated by the name of MENDON, and was attached to the county of Middlesex, May 12, 1670. Moses Payn and Peter Brackett, the original grantees, assigned all their right, title and interest in the territory to the selectmen of Mendon.

There was no magistrate among the first settlers, at least such as would serve the purposes of the town, for we find that Jan. 1, 1669, "the town men chose the colonell to be returned to the general courte to gain power to take the virdict of ye jury upon ye death of John Lovett-to marry-and to give the present constable his oath." These powers were conferred upon Colonel Crowne, at a general court holden at Boston. May 19, 1669.

Among other orders passed by the selectmen this year, is the following: "Ordered, by us, to read the law to ye youth, to exhorte them to the due and careful observation of ye Lord's day, and that their parents be desired to do their duty herein, for the pro moting God's glory, theirs and their children's good."

Joseph Emerson was the first minister, and was settled Dec. 1, 1669; though his salary did not begin until Jan. 1, 1670. He was son-in-law to the Rev. Mr. Bunkly, who was minister of Concord, and who concluded the terms of settlement between Mr. Emerson and the town. Mr. Emerson's salary was forty five pounds for the first two years, to be paid as follows:

"Tenn pounds at Boston yearly at some shope there, or in money at this town. The remayning to be made up, two pounds of butter for every cow, the rest in pork, wheat, barley, and soe to make the year's pay in work. Indian corn, rye, pease and beef."

After the second year he was to be paid fifty five pounds yearly. "and soe on as God shall enable them." All differences between the minister and the town were to be referred, for adjudication, to the churches of Medfieid, Dedham and Roxbury.

Mr. Emerson continued to minister to the spiritual wants of the people until the town was destroyed, by the Indians, in King Philip's war, in 1675. When the inhabitants of the town returned, in 1680, Mr. Emerson did, not come back with them.

The transactions of a town meeting, holden May 6, 1675, was the last entry in the records before the town was burned. One Richard Post was killed at this time, and, as tradition says, near the office of the Hon. William S. Hastings. Post lived on the road from Mendon leading towards Sherburne, and that portion of it upon which his house was situated, though since shut up as a public highway, has retained the name of Post's lane to this day. Post was the first man killed in King Philip's war within the bounds of the colony of Massachusetts.

After an absence of about five years, the inhabitants, or at least the major part of themm returned, and Jan. 3, 1680, was holden their first town meeting. At this meeting, among other town officers, Samuel Read was chosen "clark of the scrits." They immediately set about rebuilding another meeting house, and, Oct. 4, 1680, gave a call to Mr. Grindal Hanson to become their minister. Mr. Hanson accepted the call, and immediately entered upon his parochial duties, but was not ordained until April 7, 1684. His salary was fifty-five pounds per annum, as follows: "fifteen pounds per annum in starling country money of New England, and forty pounds per annum more to bee paid in good merchantabell country pay, such as the town raiseth." His salary was to be paid semi annually, on the 25th of October and the 25th of March. All difficulties were to be referred to a mutual council of Congregational ministers.

Benjamin Albee built the first grist-mill near where the present mill of Nathan Allen stands, and which was destroyed by the Indians, in 1675. Matthias Puffer erected the second mill in 1681, near where the first one stood. The first saw-mill was built by Serj. Josiah Chapin, and was located upon Muddy brook, some distance above where the present road to Milford crosses it. Joseph and Angell Torrey soon after built a second saw mill upon School brook, near where the present mill of Obadiah Wood and Lyman Keith stands. Joseph Stevens was the first blacksmith, and James Bick the second, though it seems he did not live up to his agreement, "to do the town's smithery work to their acceptance," for within a year after his settlement the constable was directed "to warn James Bick forthwith to take off his frame and fence from the town's land, and no more to In Comber the same."

From this time the inhabitants of the town seem to have pursued the even tenor of their ways for many years, without any thing remarkable in the history of their proceedings. Mr. Rawson, their minister, and who was a contemporary and an acquaintance of Cotton Mather, died Feb. 6, 1715, aged 56 years, and in the 35th year of his ministry. He was an excellent scholar and an eminent divine. His reputation as a theologian was of such a character that the general court sometimes referred grave and serious questions of ecclesiastical polity to him for his decision.

Mr. Rawson, though he still continued the minister of the town, did not perform his parochial duties for some time before his decease. Feb. 9, 1716, in concurrence with the church, who had chosen Mr. Joseph Dorr for their pastor, the town also chose him to be their minister; and. on the 24th ct the same month, Mr. Dorr was ordained. His salary was £70 for the first year, and £75 per annum afterwards; and for settlement, or "encouragement," £160 was also granted.

In the year 1726, a great sickness prevailed in this town, as appears by the following official record. Sept. 16, 1726. Tn consideration of the great sickness which is now in the town, it passed by a clere vote to lett swine run at large the remainder of the year, being yokel and ringed as the law directs." Tradition reports this sickness to have been a dysentery, and that many died of it.

In 1727, the building of a new meeting house, being the present old one, near the office of Warren Rawson. Esq., began to he talked about. This subject gave rise to a long and angry contention. At last, after the opposition had become wearied with the further invention of expethents to put off the building of the house; Oct. 22, 1730, "It was voted, that the town provide a Barrell of Rhum towards the raising the meeting house.' After it was raised. however, some one of the opposition, not easily appeased, it seems. undertook to cut off the S. W. corner post, but did not accomplish his object. His mark, it is said, remains to this day. Notice was taken of this act as follows : At a town meeting, Aug. 21, 1731, Vted whether the Town would chuse a Committee to see if they could find out who bath, by cutting damnified the meeting house ; and it passed in the negative."

The Rev. Joseph Dorr died March 9, 1768, aged 79, and in the 52d year of his ministry. Je was succeeded by Rev, Joseph Willard who was ordained April 19, 1769. His salary was "60 pounds lawful money, with the interest of the ministry money and the lands belonging to the Precinct."

The Rev. Joseph Willard was dismissed from his ministerial charge, in concurrence with the church, Dec. 3, 1782. Certain pecuniary matters in dispute between Mr. Willard and the parish were referred, for settlement, to an arbitration, composed of Ezra Whitney. Esq., of Douglass, Capt. Samuel Warren, of Milford, and James Haws, Esq of West borough.

The Rev. Mr. Willard was succeeded by the Rev. Caleb Alexander, who was installed over the first Congregational society in Mendon, March 23, 1786. The society failing to support him, he was dismissed June 13, 1791, for the purpose of being retained by the first parish. The parish contract with Mr. Alexander is dated Feb. 10, 1792. His salary was 90 pounds per annum. Mr. Alexander continued to be the minister of the first parish in Mendon until Dec. 7, 1802, when, in concurrence with the church he was dismissed.

Rev. Preserved Smith was his successor. He was installed Oct. 2, 1805, over the first and second parishes. His salary was $333.33, one fifth of which was contributed by the second parish. Oct. 10, 1812, Mr. Smith was dismissed, in concurrence with the church.

June 16, 1814. the parish gave a call to the Rev. Luther Bailey to settle with them in the work of the ministry, but Mr. Bailey did not accede to their proposal.

Rev. Adin Ballou, the present minister of the first parish, was installed May 3, 1832, with a salary of $400 per annum. The installation sermon was preached by the Rev. Bernard Whitman, of Waltham. April 1, 1837, Mr. Ballon's salary was raised to $500 per annum.

The town of Mendon parted with portions of her territory upon the incroporation of every one of the towns lying upon her borders, and our Rhode Island neighbors are endeavoring, still further, to curtail us of our fair proportions. The towns of Bellingham, Milford., Upton, Northbridge, and Uxbridge each came in for their share of our territory when they were erected into separate towns.

The following table shows "the condition and products of certain branches of industry" in the town of Mendon, for the year ending April 1, 1837. It is copied from an official document.

Visit Mendon, Massachusetts, USA
Discover the people who lived there, the places they visited and the stories they shared. 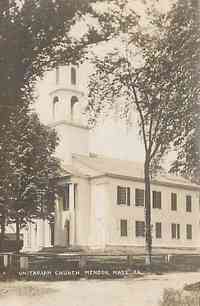 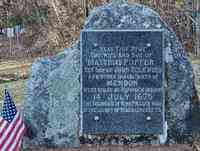