Freetown. - This was the fifth town formed in Bristol county, and was originally known as Freeman's Land, or the Freemen's Purchase, and included the present town of Fall River, set off February 26, 1803. On June 17, 1700, the bounds between Freetown and Tiverton were established. On June 15, 1815, a small part was annexed to Fairhaven. The State census of 1895 gives the population of Freetown as 1,405, and the number of registered voters in 1897 as 299. The town forms a part of the Thirteenth Congressional District, and with Acushnet, Dartmouth and Fairhaven constitutes the Sixth Representative district, with 2,409 legal voters, entitling the district to one representative. The town is situated on the eastern border of the county, centrally north and south, and is bounded on the north by Berkley, on th east by Plymouth count, on the south by New Bedford and Dartmouth, and on the west by Dighton and Fall River. There are two post-offices, Freetown and East Freetown.

The largest village in Freetown is Assonet (Freetown P. O), which is pleasantly situated in the northern part of the town and contains three general stores, in one of which is the post-office, a blacksmith shop, paint shop, liver stable, and the gun works of N. R. Davis & Son, who conduct a large business in the manufacture of sporting goods; this is the largest industry in the town and was started years ago in a small way. The Assonet river flows through the village and on it are located the large slaughter house ofD. M. Anthony & Co., of Fall River; a saw and waste mill and an old grist mill. There are two churches in the village, a Congregational and Christian, and two miles north on the Taunton road is the old Friends' meeting-house. Newar this are two buildings which, under the auspices of the Fall River Boys' Club, are used as orphan homes. One of these was established by George W. Dean, who gave his farm for the purpose; the building and site of the other were purchased from Mrs. Job Dean. These, however, have not been very extensively used since the completion of the Boys' Club building in Fall River. The grist mill near Assonet was long owned and operated by James Winslow, great-grandfather of J. H. Winslow, who now conducts a general store in the village. The new town hall is also in Assonet village. A free public library is maintained, called the Gilbert H. Hathaway Library. Mr. Hathaway made a bequest of $1,000 for this purpose, and the additional expense was met by the town, three of which are in the eastern and three in the western part. A newspaper is published by Samuel E. Fiske, the Freetown Journal.

There are four railroad stations in the town - Crystal Spring, on the Newport branch; Assonet on the same; Braley's Station and East Freetown on the Taunton division. At East Freetown, in the extreme eastern part, is a small settlement, with three saw mills, a blacksmith shop, a school and two churches.

Braleytown, or Braley's Station, is a mere hamlet in the extreme southern part with a church and a blacksmith shop. The town farm is situated one mile northwest of Assonet. Much of the land in Freetown is now covered by forest and undergrowth and was once under cultivation. Mixed farming is carried on, but the principal occupation of the farmers is market gardening and milk producing for the larger markets. As an indication of the decline of general farming it may be stated that many farmers import hay for cattle to produce milk. Among the representative farmers of this town may be mentioned G. M. Nichols, J. W. Winslow, George D. Williams, David B. Evans, Kenelm Winslow, Marcus Woydell, Ambrose D. Winslow, Phineas D. Fletcher, Charles E. Hathaway, Andrew Webster, David Terry, Anthoney D. Hathaway, Albert White, and Marcus M. Rounseville.

OUR COUNTY AND ITS PEOPLE A DESCRIPTIVE AND BIOGRAPHICAL... Boston History Company, 1899 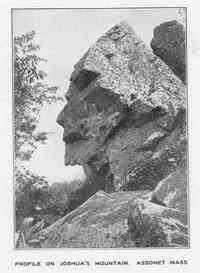