In the Parish of Ste. Therese de Blainville about 2 1/ 2 leagues of land are non-conceded and unfit for cultivation, having, for the most part, a substratum of barren sand. The have not, in general, been surveyed, but there is a road across them. Some concessions were granted previously to 1759, measuring 3 arpents by 20, and paying 2 sols each arpent, or 6 francs for every 60 arpents and 5 sols quit rent. It is supposed that if new lands could be obtained on terms similar to those granted in the ancient seigniories, that many of the inhabitants of this parish would gladly avail themselves of the opportunity. Although the lands that remain unconceded in this P. are but little fit for cultivation, they would soon be taken (at least those which could be turned to any utility) if the seignior would concede them on the ancient terms; but it is said that he demands double and more than double the price stated in the ancient contracts of concession.


A Topographical Dictionary of The Province of Lower Canada by Joseph Bouchette, Esq., London, 1832

Visit Sainte-Thérèse, Québec, Canada (Blainville)
Discover the people who lived there, the places they visited and the stories they shared. 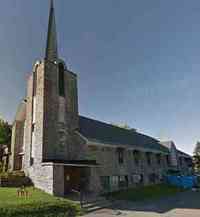