WILLIAMSPORT, Pa., June 4. - Williamsport has been stricken by the most severe flood ever known in the state. All have suffered great loss. Large numbers of our citizens are wholly destitute and suffering for the necessaries of life. Those of our people able to do so, are giving what they can, but are unable to furnish the relief needed. We appeal to a generous public in the name of God to help us. Let everything be sent to the mayor of Williamsport.

The water here rose 34 feet, flooding three-quarters of the city. About 200,000,000 feet of logs. 40,000,000 feet of timber, several mills and factories and much other property have been carried away or destroyed, and a number of lives lost. Many business men suffer heavily, but the largest loss is to the lumber men.

Two children of Charles Edwards, three of a family named Schultz, a child of William Dietrich, a man named MITCHLER and an unknown man perished in this city.

At Nippenose, twelve miles up the river twelve persons were drowned. They were members of the families of George and William Youngman, and two young lady visitors.

ABRAM FEDERICY and his 14-year-old son were drowned by being carried over the falls.

Five men and a baby were drowned at Baker's Camp, northern part of Lycoming county. All bridges on the Pennsylvania railroad from Linden to Sunbury were carried away. Railroad traffic is almost suspended.

Visit Williamsport, Pennsylvania, USA
Discover the people who lived there, the places they visited and the stories they shared. 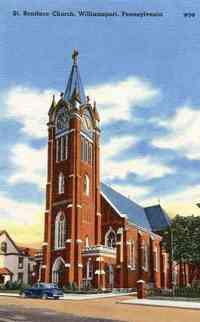