1900 - PITTSBURG BUILDING FALLS. THREE KILLED AND SIX BADLY INJURED BY THE COLLAPSE OF A BUSINESS STRUCTURE.

Pittsburg, April 12. - Without warning and with a rush and a roar, the four-story brick building at the corner of Second Avenue and Wood Street, collapsed to-day, burying in its ruins a number of people, three of whom were taken out dead, six badly hurt, and several others slightly injured.

The dead are: MRS. MARTHA JONES, sixty-four years old, of 511 Second Avenue; EUGENE BERNHARDT, twenty-nine years old, of 1,708 Manhattan Street, Allegheny, salesman for Armstrong and McKelvy Company, and OSCAR BIGLER, a carpenter, whose home is supposed to be hear Harrisburg.

Among the injured is: NOEL CASPER of Ellsworth, sales agent for Armstrong and McKelvy Company; his leg is broken, and he is badly bruised.

The building was occupied by the Armstrong-McKelvy Lead and Oil Company. It was being remodeled by McGOVERN & LYTTLE, contractors, who were converting the lower floors of the corner store and that next door into one large room, which was to have been occupied by the lead company. About 48 feet of the middle partition had been removed and steel girders, supported by heavy iron posts, were in place, and the finishing touches were being put on the remodeling work.

The company this morning began the transfer of their stock from one room to the other and apparently centralized the heavy weight of the lead and oils about the middle of the structure. Up to the present this is the only solution advanced for the collapse, which began by the second floor breaking through, carrying with it the two floors above, making a breach from top to bottom through the centre of the building.

Rumors that many people were buried under the debris were rife, but the list above comprises all of the casualties. The loss to the firm will be about $40,000.

When the accident occurred business was being transacted on the first floor as usual. MRS. MARTHA JONES had evidently just completed a purchase, for when her body and that of the salesman, BERNHARDT, who waited on her, were found the man had a $5 bill in his hand and the woman clutched her pocketbook, demonstrating the fact that the collapse came so suddenly that neither had time to move.

Within a few minutes after the accident a great crowd gathered, all anxious to help in the rescue of the many supposed to be buried. Firemen and policemen, however, soon had the place roped off, and the work of rescue was carried on systematically, and, notwithstanding the great danger from the toppling walls, the rescuers worked until all the buried were extricated.

Building Inspector J. A. A. BROWN will begin an investigation to-morrow into the cause of the accident.

Visit Pittsburgh, Pennsylvania, USA
Discover the people who lived there, the places they visited and the stories they shared. 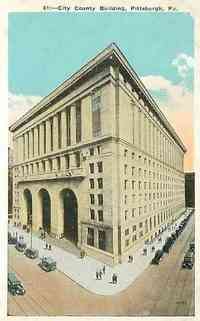