1893 - FARGO'S SAD DISASTER. ALMOST THE ENTIRE BUSINESS PORTION OF FARGO WIPED OUT BY FIRE. FOUR FIRE DEPARTMENTS ARE UNABLE TO COPE WITH THE RAGING ELEMENT.

THE WORST AND MOST DESTRUCTIVE DISASTER IN THE HISTORY OF THE STATE.

OVER A MILLION DOLLARS WORTH OF PROPERTY MELTS AWAY IN THIN AIR.

Moorhead, Minn., June 7 - About 3 o'clock this afternoon the alarm of fire was sounded, and it was reported that some ashes thrown from the Little Gem restaurant on Front street started the fire in the rear of HEARSEMAN'S store. The department was promptly on hand, but a strong wind from the southwest fanned the flames until one blaze enveloped the row of wooden houses east of the united block, adjoining the Gem store, and SCHOFIELD'S gun store could not be saved, the fire taking in the contents, including a keg of powder and innumerable cartridges. The wind carried the fire across the street and soon had MAGILL'S great warehouse a heap of ashes. It then jumped over the elevator building and took in the frame structures occupied by DARLING, ANGELL, FRANCIS & SOUTHERLAND, the Piano people and JOHNSON & Sons.

It went back and licked up the telegraph office and then doubled its course and tackled the Red River Valley national bank brick block across the alley from JOHNSON & Sons. Meanwhile sparks had set the Forum office on fire in a dozen places a dozen times. The boys took turns in setting type and putting out the blazes. Then came MORTON'S office, ALLEN'S plumbing shop, the Forum, HAZEN'S, TAYLOR'S, and then the loan agency brick block. In this was the Great Northern ticket office, ENNERSON'S, up stairs, BALL & WATSON'S law office on the corner of Northern Pacific avenue and Broadway. The Fargo Loan agency occupied the first floor and I. P. CLAFF and M. A. HILDRETH had offices up stairs. In the basement was GORDON'S barber shop and bath rooms. The fire totally destroyed the entire block and contents. East of this was a row of wooden buildings, all of which went including JEWETT'S, PICTON'S, HILDEBRAND'S and the entire block of machinery depots and warehouses, DEERING'S, McCORMICK'S, Buckeye, etc. On the alley east of the Red River bank were the offices of JOSLIN,
McKINSTREY, TERRY, DAVIS and C. D. WOOD and the machine house, all of which went. It was thought for a time that the fire could be stopped at Northern Pacific avenue but it leaped across that wide street, devouring the Grant hotel barns, the bowling alley, WYNN'S billiard hall, BOWER'S cigar store and on to Broadway into the Merchants bank and the entire east side of Broadway up to the Great Northern deposit and beyond. The fire also crossed Broadway unto HOLMES clothing store, turning north rapidly. The Citizens bank block, including ALEX STERNS clothing store and dwelling houses east of Broadway from Northern Pacific avenue to the north side of the school in Oak grove, are reported burning. This will probably take in the whole First ward to the river, the Great Northern track and beyond, including the mills and elevators. The flames were of such a character that it is almost impossible to do anything beyond drenching the buildings in the possible track of the fire. The direct line of the fire in front of the high wind could not be stopped by any human means. The buildings on the east side of Broadway consumed are the Merchants bank, LEWIS & YODER'S grocery store, American express, FLEMING'S drug store, SMITH'S meat market, DICK FIELD'S building, CHRISTIANSON'S drug store, Columbia Cafe, APPEL'S clothing store, LOGAN'S gallery, McKENDRY, RENTSCHLER and SCHOENINGER'S, queensware's store, BRISTOL & SWEET'S, the Republican building, KEENEY block, FULLER'S, CORK'S grocery and all north. Every hotel in the city is burned except the Headquarters.
Only one bank is left in the city the First National. All are of almost solid business blocks. Two blocks wide and five blocks long was destroyed. The loss will foot up in the millions.

Fargo's Fire.
The business portion of the city of Fargo was almost completely devastated by fire between 2 o'clock yesterday afternoon and 11 o'clock last night. As nearly as can be learned the fire originated in the MAGILL warehouse, and spread rapidly along Broadway and Front streets. It communicated at once to the building of the Western Telegraph company and other adjacent structures and soon got beyond control of the firemen. Assistance was telegraphed for and the Grand Forks, Moorhead and Casselton departments at once responded. It is learned, however, that the Fargo waterworks are so constructed that but eight streams of water can be thrown and so the only assistance which could be rendered by outside companies would be the replacing of broken apparatus and other work aside from the throwing of water. All efforts to get the fire under control seemed to be in vain, for it spread to the business blocks on Broadway, and soon these buildings succumbed to the flames. As nearly as can be learned, four banks, the Merchants State (whose cashier L. S. CHAMPINE, was in the city yesterday increasing its capital to $100,000, the Citizens National, and the Red River Valley National and the defunct Mears institution are gone, the Forum and Republican offices were destroyed, as was also that of the Commonwealth, whose editor, MR. GRANT, left for Fargo last night. MR. GRANT estimates his loss at $10,000, with insurance at $5,000. The plant of the Dakota -- the new independent paper which was to take the place of the Grand Forks Independent, was to have been moved yesterday, and if it was, and no permit to move obtained from the insurance company, will be a total loss. The Columbia hotel, Fargo's finest hostelry, is also among the ruins, and the ELLIOT house, another hotel is gone. The warehouses of the McCORMACK and DEERING companies are among the ruins and the entire business portion of the town is in ashes.

ZERXAS store and the Headquarters seem to have come out all night. At about 11 o'clock last night the fire was gotten practically under control. The loss cannot be estimated, but will reach into the millions.

Visit Fargo, North Dakota, USA
Discover the people who lived there, the places they visited and the stories they shared. 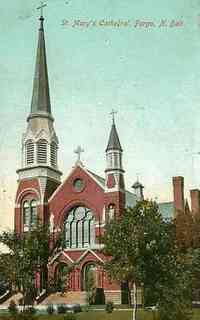