MOST OF THEM LEFT BEHIND THEIR CLOTHES AND VALUABLES - MEN WORE PAJAMAS AND OVERCOATS WHILE SOME OF THE WOMEN GRABBED BALL DRESSES AND OTHERS LITTLE OR NOTHING - THOSE WHO WENT BACK IN AN EFFORT TO SAVE PERSONAL PROPERTY HAD NARROW ESCAPES - LOSS ON HOTEL $140,000.

Asheville, N. C., April 14. - Roused from their slumber after 2 o'clock this morning by an alarm of fire, seventy-five guests of the fashionable Kenilworth Inn, three miles from this city, barely had time to don some scanty articles of clothing and make their escape from the burning building. The hotel was completely destroyed, the total loss being estimated at $250,000. The insurance is placed at $75,000.

The fire started in the north end of the building over the boiler room. A strong wind was blowing from the southwest and the flames were fanned to the other end of the frame structure where the majority of the guests were asleep.

There was a wild scramble for the exits but there was nothing bordering on a panic among either men, women or children in spite of the great confusion at the time. Half an hour later when it was believed that all were out the roll was called and every person accounted for. It was a motley array however, some of the women appearing in ball gowns, and others in even more scanty and varying degrees of negligee. Many of the men wore nothing but their underclothing covered by their overcoats. Almost every describable manner of dress was represented.

Many persons after conquering the first thought of self preservation that had led to instant flight ventured back to the smoke-filled halls and into their rooms to rescue their trunks and other personal effects which they had abandoned.

Some brought forth rocking chairs wash stands and every manner of articles, which soon littered the lawns.

As the fire kept raging, fanned by the rapidly increasing wind the heat became so intense that all hope of saving possessions was abandoned. Several persons who had re-entered the hotel not realizing that the fire had reached the south wing, were almost caught. Shouts of friends from the outside were answered by yells for help and heroic efforts of several guests and policemen alone saved them from being cut off from every avenue of escape.

The scantily clad guests were taken in at the Battery Park hotel a nearby residence and cared for the remainder of the night. The Kenilworth Inn was owned by Senator GAZZAM of Philadelphia and was built 14 years ago by the Kenilworth Inn company at a cost of $140,000. GEORGE W. VANDERBILT is believed to be the heaviest stock-holder in the company which was composed largely of northern capitalists.

During the conflagration which destroyed the Kenilworth Inn early today several firemen received painful burns. Former State Senator GAZZAM of Philadelphis, jumped from the third story while the firemen were breaking open the door of his room. In the descent he barely escaped striking against the stone arch at the front of the building. He received numerous painful injuries and was removed to Baltimore hospital. A negro porter was badly hurt by falling from the third floor, the fall being broken, however, by his catching projecting windows and landing on a roof below them. All the guests were accounted for except a MRS. TERRELL, whose address was not ascertained.

Visit Asheville, North Carolina, USA
Discover the people who lived there, the places they visited and the stories they shared. 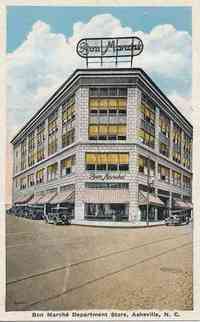