1906 - DRUNKEN MAN WRECKS THE MONTREAL EXPRESS - Switch Locked So That Train Had to Take a Siding. ENGINE CREW BADLY HURT

Special to The New York Times.

BENNINGTON, Vt., Jan. 6. - The fast express bound from Montreal to New York City by way of the Rutland, Boston and Maine and the New York Central Railroads, was deliberately wrecked early this morning. The engineer and fireman of the train were badly hurt and several passengers were shaken up and bruised.

The wreck occurred at Wallomsac Station, near White Creek, N. Y., on the Bennington Branch of the Boston and Maine Railroad. Only the presence of two freight cars on a siding, upon which the express train was switched, saved the train from a far more serious accident, it is believed.

After the wreck it was found that the switch near the Walloomsac station had been deliberately set and locked against the express, so that it would have to take the siding. The train was moving at a fair rate of speed when the accident occurred, and the locomotive, baggage, and express cars were badly wrecked.

Engineer Charles Wardwell and Fireman Charles Simpson of Rutland were scalded and bruised and Baggagemen McKierman of Mechanicsville. George Gresgonious, Thomas Kierduck, and Peter Lucini, all of Montreal, were slightly injured. Traffic was stopped for several hours. The police were notified of the affair, and an investigation was started, in the hope of arresting the person responsible for the crime.

Every doctor in the vicinity responded to the call for assistance, some driving to the scene of the wreck and others going on a special train. Dr. William E. Fox of North Hoosick, who lives about two miles away from the place where the wreck occurred, was the first to arrive, and did heroic work. He aided in pulling Engineer Wardwell from the debris.

The physicians attended the injured by the light of the blazing cars. Later the Walloomsac people fought the flames until they were extinguished. The cars were thrown up the fifteen-foot bank toward the highway, their sides ripped out. The rear wheels of the locomotive were fifty feet away from the locomotive itself, which was piled up against the baggage car directly across the track. The tracks were torn out a distance of 100 and covered with splinters of wood.

The escape of the full train load was miraculous. Many passengers were badly shaken up and suffered from shock. One man was hurled through a window, but escaped unhurt. The wrecking crew arrived at daybreak. Traffic cannot be resumed before Monday. It is believed that the train wrecker was intoxicated, as two empty whisky bottles were found within three feet of the switch.

Visit White Creek, New York, USA
Discover the people who lived there, the places they visited and the stories they shared. 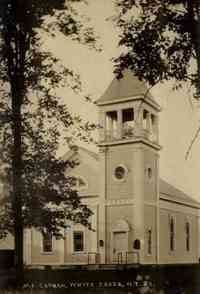