Newark, N.J., March 20. - Ten passengers were severely injured last night in a rear end trolley car collision, but at a late hour no fatalities had resulted. The accident happened on Belleville avenue at a point where there is a slight down grade. Car. No. 708, in charge of Motorman WILLIAM McLANE, crashed into car No. 278, in charge of Motorman BERNARD McDERMOTT. Car No. 278 had stopped to take on passengers, and McLANE could not stop his car in time to prevent the collision. He shut off the power, applied the brakes and jumped, saving himself.

The police and doctors lists contained the following:

GEORGE BUCHANAN, 146 Verona avenue; gash on back of skull separating scalp from skull.

MISS JENNIE DOLAN, 308 North Fifth street, Harrison; bruised on one side of face and all cut on the same side of body to her knees.

JAMES HOFFMAN, Belleville, motorman employed by the company, who was a passenger at the time, head cut.

ALEXANDER MEEKER, fireman attached to engine No. 13, legs bruised and both shins cut to bone.

Visit Newark, New Jersey, USA
Discover the people who lived there, the places they visited and the stories they shared. 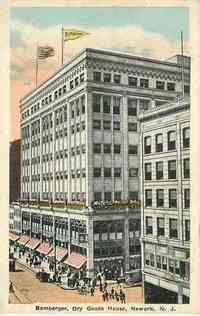