1885 - WENT THROUGH THE BRIDGE. A TRAIN WRECKED AND MANY PERSONS KILLED AND INJURED.

Jackson, Miss., Aug 27. - The following particulars were received here to-day of a frightful accident on the narrow gauge known at the Little J., which runs from Natchez to Jackson:

The mail and passenger express which left Jackson at 6:30 A.M. went through the bridge over the Pierre Bayou, which is 38 miles east of Natchez. The bridge gave way as the passenger train was on it, and the engine dropped to the bottom of the bayou, a distance of 60 feet. The mail, express, and smoking car were piled up on top of it. The ladies' coach was left on the edge of the bridge, partly off.

Three persons were killed instantly and a large number injured. The engineer, MR. POWELL, of Water Valley; the fireman, JOHN McCLUTCHY, of Natchez, and a brakeman, MR. ROBERT PERRY, of Learned, were killed. J. W. LANE, express messanger, was seriously injured. The mail agent, a colored man named OWEN ANDERSON, was seriously injured. R. W. CAMPBELL, of Fayette, received a severe and dangerous contusion above the eye. R. H. TRULY was painfully, but not seriously, bruised on the head and breast. JAMES MENG, newsboy, had his left arm broken. W. F. BARCLAY, of Learned, is seriously injured on the head and breast. E. F. COCHRAN and MR. DAUGHERTY, of Natchez; HENRY KENCKER, of Cincinnati, and a few others were slightly hurt.

There was no visible cause for the accident, the bridge having been rebuilt only a few months since. The locality, however, seems to be a dangerous and unfortunate one, this being the fourth accident that has happened within the past three years at that point. It is surmised that the bridge may have been tampered with, but his is doubtful. Mail trains will not be delayed, but will transfer at the scene of the wreck for the present.

Visit Jackson, Mississippi, USA
Discover the people who lived there, the places they visited and the stories they shared. 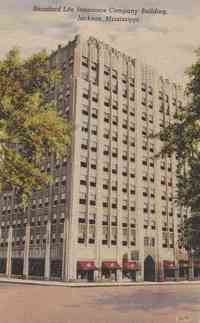