1925 - THEATER RIGGING LOFT COLLAPSES; 12 INJURED. SEVERAL MEMBERS OF CHORUS HURT WHEN PIECES OF MASONRY, SCENERY AND LIGHTS BEGIN TO FALL WITH ROAR LIKE AN EXPLOSION

PANIC AMONG AUDIENCE PROBABLY AVERTED WHEN MEMBER OF CAST APPEARS ON STAGE AND BEGINS TO SING.

Wilmington, Del., Dec. 11. - (AP) - The roof of the rigging loft of the Playhouse here collapsed tonight during the second scene of a performance of "The Song of the Flame." More than a dozen members of the chorus occupied the stage at the time, were injured, several seriously, and the effects of the company so badly damaged that the company will be unable to continue its engagement.
The seriously injured are:
Madame CHEREKO, a principal of the Russian Art Choir, fractured skull.
NORMAN STENGEL of the Russian choir, possible fracture of the skull.
MISS BLANCHE COLLINS, internal injuries.
Sprains and cuts, less serious injuries were suffered by:
MME. ANDRIEFSKI, MME. TRUITZKAYA, M. DAVIDENKO and BOB LEROY.
Many of the stage employes were also slightly cut and bruised by falling debris.

The play was an Arthur Hammerstein production.

More than sixty men and women were on the stage when, with a roar like an explosion, pieces of masonry, scenery and lights began to fall to the stage. The players continued to sing and dodge the missiles for a few minutes, but finally were compelled to jump into the orchestra pit as the downpour of masonry became heavier.

A panic among the audience probably was prevented by DOROTHY MacKAYE, second leading lady in the cast. As the asbestos curtain was lowered upon the scene of havoc on the stage. MISS MacKAYE stepped to the footlights and began to sing. Members of the chorus who had fled to the aisles joined in the chorus of her song and the audience remained in their seats until Mr. Hammerstein announced that the performance would not be completed.

Many left the theater unaware of the extent of the mishap.

Visit Wilmington, Delaware, USA
Discover the people who lived there, the places they visited and the stories they shared. 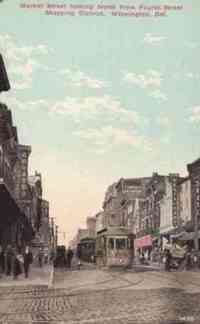 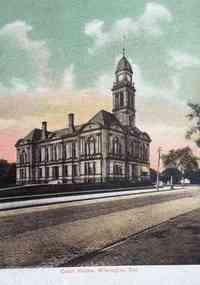