House Owned by Gay Brothers, Valued at $5,000, Destroyed. It Was Occupied by Bernard Frank.

Three firemen overcome by heat and a handsome two-story residence owned by Charles and John Gay, occupied by Bernard Frank on South Lawrence Street, destroyed, is the result of a fire yesterday afternoon.

The injured firemen are Captain W. T. Jones of Hose Company No. 1, Captain E. J. Griffin and B. C. Lay. They were unconscious for several hours and are yet very weak from their experience. Captain Griffin and Captain Jones are at the fire department headquarters on Madison Avenue. Flagman Lay is at the residence of J. M. Cody on South Lawrence Street.

A stiff wind was blowing at the time the fire broke out, and the sparks were blown westward for several blocks. Nearly every house in that neighborhood had a man on the roof sweeping off the sparks.

The residence of F. R. Graves on South Hull Street, two blocks away, caught fire and part of the roof was destroyed. Chief Browder sent an engine and a detachment of men around to this residence and two streams were turned on the burning roof.

How the fire in the residence of Mr. Frank originated is a mystery.

The fire attracted much attention and hundreds flocked to the scene. Willing hands went to work to save the furniture and a great deal of the household effects were removed.

The fire burned off the roof and the upper story, and it is thought the remaining part of the building will have to be torn away in order to rebuild.

The building is owned by Charles and John Gay and is valued at $5,000 insured for half that amount. Mr. Frank carried $3,000 insurance on his furniture, which will cover his loss.

All the firemen were badly used up and thoroughly soaked.

Visit Montgomery, Alabama, USA
Discover the people who lived there, the places they visited and the stories they shared. 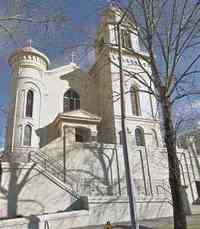