Special Dispatch to the New-York Times.

ST. JOHN, N. B., June 28. - Business is now proceeding as usual, and there is little to record except the constant receipt of money and provisions and the unsuccessful efforts to recover missing people. It is now known that 14 persons perished and that over 90 received injuries, some proving fatal. Gen. Warner, United States Consul, is working indefatigably in behalf of the sufferers, and other United States citizens, resident here, are foremost in the good work. Mr. Trusdell, Superintendent of the Chicago Relief Society, was before the Executive Committee to-day and explained the workings of the organization. A good system is now being arranged. Stolen goods are being recovered in the suburbs of the town. It is reported that two schooners loaded with stolen goods have arrived at Parreboro, Nova Scotia, and that masters and crews are under arrest.

St. John, June 28, - A public meeting was held yesterday, which was presided over by the Mayor. Immediate action was urged with regard to widening and improving the streets, placing restrictions on the erection of wooden or brick-faced buildings, placing the harbor in a condition to continue commerce, the raising of a loan to rebuild the city, and the admission of building material free of duty for the space of 12 months. Various committees were appointed to confer with the Council on the above subjects. The insurance representatives have signed an agreement binding their companies to accept no insurance on any wooden or brick-faced buildings hereafter erected, or on any buildings hereafter roofed with shingles, or the contents thereof, within St. John.

The Hamilton City Corporation has increased its contribution to the St. John sufferers to $10,000.

At a meeting of the Executive Committee to-day Mr. Truesdell, of Chicago, explained the working of the system organized in that city after the great fire. He made numerous suggestions as to distributing relief, referred at length to the special cases which would arise, and advised the committee to be careful in expending the money, for the effects of the fire would be felt many years. A number of the injured are yet in the hospital, and some 12 or 15 come daily to have their wounds dressed. All are doing well.

HALIFAX, June 28. - The cash collections now amount to $25,000. Clothing is still being collected and forwarded. A large meeting of Fred Masons was held, at which a resolution of sympathy with their St. John brethren was adopted, and steps taken to secure donations from all lodges in the province.

SAN FRANCISCO, June 28. - At a meeting of citizens yesterday, called by the Mayor and British Consul, a committee of 30 prominent business men was appointed to canvas the city for subscriptions to the St. John relief fund.

LONDON, June 28. - The Mayor of Liverpool, in accordance with the expressed desire of a body of merchants and ship-owners, has decided to call a meeting to obtain funds for the sufferers by the St. John fire.

A meeting held in Glasgow to-day subscribed St. John, ...for the relief of the citizens of St. John, and ordered... to be forwarded by telegraph to the Mayor of St. John.

MANCHESTER, June 28. - A town meeting has been called by the Mayor for Friday for the relief of the sufferers by the St. John fire.

QUEBEC, June 28. - A private meeting of shareholders in the Stadacona Insurance Company was held here to-night, to consider the course the company shall pursue in view of its heavy loss at St. John.


1877, June 20 - Fire rages through Saint John for over nine hours, wiping out the entire business district and burning down 1,612 houses (over two-thirds of the housing stock), leaving 15,000 homeless; kills 19 people, razes over 80 hectares of land, causes $27 million worth of damage. The Great Fire begins when a spark falls into a bundle of hay at a downtown store. Most of the city's buildings were made of wood that had dried out during a particularly dry spring, and the flames, driven by a strong breeze, soon became unmanageable. When the rebuilding began, most of the downtown's new buildings were constructed out of granite and stone and stringent fire regulations brought in.

Visit Saint John, New Brunswick, Canada
Discover the people who lived there, the places they visited and the stories they shared. 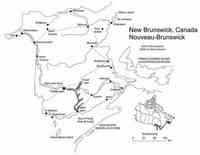 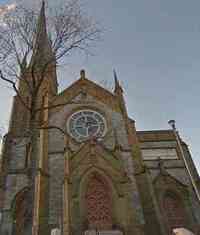