In 1809, Madison succeeded Jefferson as president, defeating Charles C. Pinckney. His wife, Dolley Payne Todd, whom he married in 1794, brought a new social sparkle to the executive mansion. In the meantime, increasing tension with Britain culminated in the War of 1812—a war for which the United States was unprepared and for which Madison lacked the executive talent to clear out incompetence and mobilize the nation's energies. Madison was reelected in 1812, running against the Federalist De Witt Clinton. In 1814, the British actually captured Washington and forced Madison to flee to Virginia.

Madison's domestic program capitulated to the Hamiltonian policies that he had resisted 20 years before and he now signed bills to establish a United States Bank and a higher tariff. 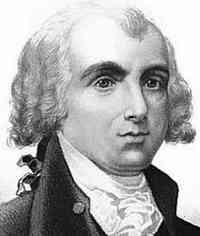