Elected vice president in 1944, Truman became president upon Roosevelt's sudden death in April 1945 and was immediately faced with the problems of winding down the war against the Axis and preparing the nation for postwar adjustment. Germany surrendered on May 8, and in July Truman attended the Potsdam Conference to discuss the settlement plans for postwar Europe. To end the war with Japan, he authorized the dropping of atomic bombs on Hiroshima and Nagasaki on Aug. 6 and Aug. 9, 1945. Japan surrendered on Aug. 14. Although the action undoubtedly saved many American lives by bringing the war to an end, the morality of the decision is still debated.

The years 1947–48 were distinguished by civil-rights proposals, the Truman Doctrine to contain the spread of Communism, and the Marshall Plan to aid in the economic reconstruction of war-ravaged nations. Truman's general record, highlighted by a vigorous Fair Deal campaign, brought about his unexpected election in 1948 over the heavily favored Thomas E. Dewey.

Truman's second term was primarily concerned with the cold war with the Soviet Union, the implementing of the North Atlantic Pact, the United Nations police action in Korea, and the vast rearmament program with its accompanying problems of economic stabilization.

On March 29, 1952, Truman announced that he would not run again for the presidency. After leaving the White House, he returned to his home in Independence, Mo., to write his memoirs. 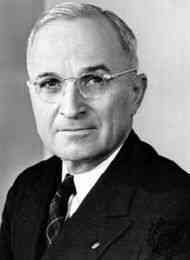 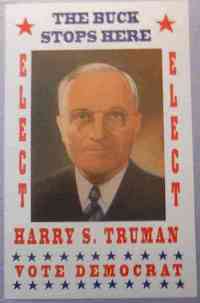 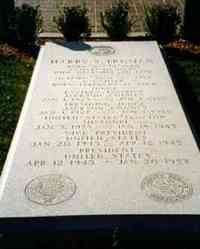