The township is of an oblong figure, comprising an area of about 42 square miles, being about 13 miles in length, from north to south, and having a mean breadth of more than 3 miles.

The surface is various; the southern section of the township being level, the northern diversified with hill and dale, and it is rough and stony. Upon the border of the sound, there are large tracts of marine alluvial or salt marsh, comprising, as had been estimated, 1000 acres.

The soil is also various. The northern section is a gravelly loam; in other sections there are some tracts of sandy loam, and some argillaceous, and the marine alluvial already noticed.

Of the waters of the town, the Hammonassett river, which washes its western border, and the Menunketesuck, which runs through its eastern section and discharges itself into Pochaug harbour, in Saybrook, are the most considerable streams...

There is one harbour in the southern part of the town, tolerably safe and commodious; having seven and a half feet of water at common tides.

Some attention is paid to the business of fishing. Of the fish taken, are shad, black fish, and shell fish. White fish are also taken very plentifully, for the purposes of manure.

There are eight small vessels belonging to the town, employed in the coasting trade. Wood and ship timber, of which the town affords large supplies, form a considerable item of exportation. They are sent principally to New-York. The wood is of an excellent quality, consisting mostly of walnut and rock oak...

The staple agricultural productions are Indian corn, some rye, oats, barley, the cultivation of which (although neglected in most other towns) forms a considerable interest, beef, butter and cheese.

The manufactures of the town, exclusive of those which form the products of domestic industry, are not very important or considerable. There are 1 Woolen Factory, 3 Fulling Mills and Cloth Dressing establishments, 2 Carding Machines, 8 Grain Mills and 6 Tanneries.

The civil divisions of the town consist of 2 located Congregational Societies and 15 School Districts. Besides the located, there 2 Societies of Episcopalians and 1 of Baptists...

This township was called by the Indians Hammonassett, and was settled in 1663, by 12 families from Hartford, Windsor and Guilford.

The township was incorporated in 1703, by the name of Killingworth, although it was intended to have had the English name of Kennelworth, a mistake having been made in the record...

A Gazetteer of the States of Connecticut and Rhode-Island: Written with Care and Impartiality, from Original and Authentic Materials : Consisting of Two Parts ... : with an Accurate and Improved Map of Each State
Authors John Chauncey Pease, John Milton Niles
Publisher W.S. Marsh, 1819

Visit Killingworth, Connecticut, USA
Discover the people who lived there, the places they visited and the stories they shared. 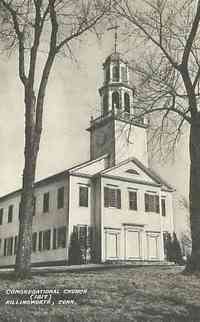