Avon is a young, enterprising town in the southeastern part Norfolk County, 17 miles south of Boston on the Old Colony Railroad, Fall River Branch, — which forms a part of the line of the town on the northwest side. The main line to Cape Cod crosses the southeast corner of the town, — where there is also a station. Stoughton forms the west and northwest boundaries ; Holbrook the northeast and east, and Brockton the south.

The assessed area is 2,428 acres, — about one fourth being woodland, — chiefly maple, with some pine. The highways are excellent, and throughout the town are much ornamented by elms and other trees, many of large size. The surface is pleasantly diversified by hill and valley, and drained by affluents of Taunton River. Mine Hill, about 250 feet high, on the boundary line between Avon and Stoughton marks the water-shed between Boston and the South shore. The rock is sienite, in which beds of iron ore occur. The soil is a black loam, rocky and hard to work.

The population is about 1,500, with some 300 dwellings. Farming is carried on to the usual extent and profit, but the chief business is manufactures, — mostly boots and shoes. There are two large factories and a small one of this kind. Avon's proportion of the aggregate value of manufactured goods in Stoughton (of which at the last census it formed a part) is about $375,000, — estimated on the basis of assessed persons and valuation on May 1, 1888. The number of assessed persons was 404, while the valuation was $527,375.

Of the village of Avon (then East Stoughton), a writer in the "Boston Traveller" said several years ago : —

" This brisk and wide-awake village is making boots for the million, and, by the good old honest way of hard work and fair dealing, is accumulating greenbacks, and keeping pace with the general run of things in this Common wealth. The people are too busy to trouble each other and too well off to move away; and so a peaceful, industrious contented and increasing population crowds the place. Wages are good, living is low; and those willing to labor-and there are but few who are not — find enough to do, and come to plenty. This the snug and tasteful cottages the pleasant gardens the well-dressed and fine-looking children, amply manifest.

" What a change has well-directed industry effected in this village in the last three decades of years! Thirty summers ago a dull, drinking, droning 'corner,' a few old houses, and a country store retailing on long credits, cod fish, mackerel, molasses and New England rum, now a thriving town, with busy manufactories, noble private dwellings, churches, school houses, handsome streets adorned with shade-trees and the elements of ' health, peace, and competence' (which Pope puts down as the grand trio of the graces which make up the happy life) distinctly visible on every hand Every breeze that sweeps along brings 'health;' no meddlesome and story-telling neighbors mar the 'peace;' and as to 'competence ' one has but to stay, and stick closely to the last, and he is sure of it." The region is undoubtedly salubrious ; and the census of 1885 shows that there were then 56 residents of the two towns who were over 80 years of age.

The Indian name of Avon (formerly Stoughton) was Punkapoag, meaning " a spring that bubbles up from red soil;" and here tile Rev. John Eliot had a village of praying Indians." It is probably this same noted spring which the citizens of the village propose to make the fountain of supply for their water-works. On Salisbury Brook, which runs through the western part of the town, is a pond containing upwards of 100 acres which has recently been purchased by Brockton to supply the water-works of that city. A street rail road now connects Avon village with Brockton.

Avon has a good building which affords a hall, and shelters her steam fire-engine and other apparatus. The schools are graded, and occupy two large buildings, valued at $18,000. There are also two or more Sunday schools. valued at The Baptists and the Roman Catholics have each a church in the village — fine edifices of wood.

Stoughton was formerly a part of Dorchester, and was incorporated in 1726. Avon embraces the easterly section of the former, from which it was set off and incorporated February 21, 1888.

Visit Avon, Massachusetts, USA
Discover the people who lived there, the places they visited and the stories they shared. 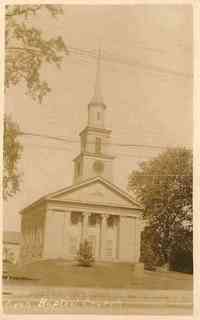