Sherborn is a fair old farming town in the southern extremity of Middlesex County, about 20 miles from Boston. It is but a few minutes' ride on the Milton Branch of the Old Colony Railroad, which also connects it with Framingham; whence also the Milford Branch of the Boston and Albany runs close to its western border. The post-offices are Sherborn (centre) and South Sherborn, — which are also railroad stations. The other village is West Sherborn. The carriage roads are good, and are bordered with many ornamental and shade trees.

Natick bounds this town on the northeast; Dover, Medfield and Millis on the southeast; Holliston on the southwest; Ashfield lies at the west; and Framingham on the northwest. The assessed area is 9,943 acres; there are upwards of 3,000 acres of forest, containing the usual varieties of trees. Nason Hill is a conspicuous eminence in the southern part. Peter's Hill, on the north is mainly a precipitous ledge of sienite some 50 feet in height, through which runs a chasm called the "Devil's Cartway." Halfway between this and the central village is Brush Hill, about 390 feet in height; whose summit affords a magnificent prospect of farms, forests, villages and ponds, and especially of Cochituate Lake, extending for several miles on the north. The beautiful "Farm Pond" lies in the easterly part of the town, sending its outlet into Charles River, which forms the eastern line. Boggestow Brook, with its tributary, Dirty-meadow Brook, drains the southern part; curving back from its southward course to the Charles. There are one or two saw mills. Many acres are devoted to the basket willow, and to cranberries and strawberries.

There is a high school, and this and others occupied, in 1885, 8 buildings valued at $37,000. A fine new school-house has recently been erected. The Sawin Academy, a handsome building, is beautifully located on high land in the centre of the town. The town-house, also, is an excellent building, and besides the hall and offices contains the public library of about 3,000 volumes. The "Mirror" and the "Tribune" are the weekly newspapers issued here. A notable establishment in the town is the Massachusetts Reformatory for Women. The two churches are Trinitarian and Unitarian Congregational.

The Indian name of the township was Boggestow, the name now borne by its principal stream and by a meadow. The incorporation was on May 27, 1674, under the name of "Sherburne;" the change to the present name being made May 3, 1852. In 1754 occurred the "Memorable Mortality," during the prevalence of which nearly 30 people died. An antiquity of the place is the old Sanger Mansion, near the centre, where General Washington breakfasted when on his way to take command of the army at Cambridge.

Visit Sherborn, Massachusetts, USA (Sherburne)
Discover the people who lived there, the places they visited and the stories they shared. 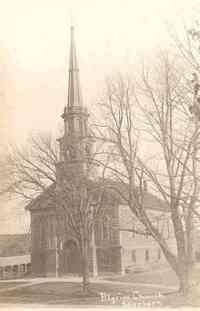