Westhampton is a farming town of 541 inhabitants, situated centrally in the western section of Hampshire County, 123 miles west of Boston, and, by highway, 8 miles west of Northampton (village). Its nearest railroad stations are those of the New Haven and Northampton Railroad in the four adjoining towns eastward. The post-office is Westhampton (centre). The other village is Loudville, on the line of Northampton, with a post-office in the latter town.

Chesterfield and Williamsburg bound it on the north; Northampton and Easthampton, on the east; the latter, also on the south; and Huntington and Chesterfield on the west. The form of the township is rhomboidal, with length north and south, and bounded by straight lines. The assessed area is 14,553 acres; of which 4,796 are forest, consisting mostly of chestnut and. maple. Several prominent elevations, as Hanging Mount in the north, Turkey Hill in the east, and Cub Hill in the west, impart a wild and romantic aspect to the scenery. There are several small and pretty ponds. The north branch of the Manhan River flows diagonally through the central, and Manhan Brook through the southwestern, section of the town. The soil, which is rather sandy and gravelly, yet fertile, rests on a bed of calciferous mica-schist and granite. In the former are found argentiferous galena and pseudomorphous quartz.

Apples, blackberries, blueberries and strawberries are a large product; tobacco is much cultivated; and considerable quantities of maple sugar and molasses are made. The value of the aggregate product of the 102 farms in 1885 was $97,946. There are in the town three or more saw, grist and wood-turning mills. Small quantities of leather, paper and metallic goods are made; the entire manufactures amounting to $25,909. The number of voters was 144; and of dwelling-houses, 115. The valuation in 1888 was $245,951, with a tax-rate of $15 on $1,800 [sic]. The eleven public school-houses are valued at $10,500. The Westhampton Reunion Library contains some 1,200 volumes. There is one church, which is Congregationalist. It is a well-constructed and commodious edifice, and stands upon an elevation.

Visit Westhampton, Massachusetts, USA
Discover the people who lived there, the places they visited and the stories they shared. 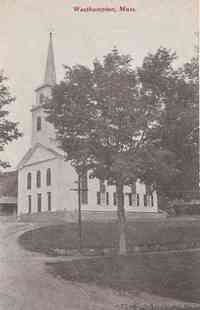