Ludlow is a farming town lying in the northern side of the eastern section of Hampden County, 90 miles from Boston. Chicopee bounds it on the west, Granby and Belchertown on the north, the latter and a northeastern projection of Wilbraham on the east, and the body of the last-mentioned town, with Springfield, on the south. The assessed area is 15,969 acres, including 5,637 acres of woodland.

The geological structure is sienite, upper conglomerate, and ferruginous gneiss; and there is a valuable quarry of red sandstone on the right bank of the Chicopee River. The land in the northeastern and eastern sections rises into three beautiful eminences, known as Facing Hills Rock, High Hill and Minechoag Mountain. The Chicopee River, here a lively and beautiful stream, washes the southeastern and the southern border of the town. Higher Brook and its tributaries drain the central, northern and northeastern sections of the town; reaching the Chicopee River in the next town west. Chapin's Pond, of 45 acres, is the largest sheet of water in the town; beside which there are several others around it in the southern part. Minechoag Pond is a beautiful lakelet at the foot of the mountain of that name, a little east of Ludlow Centre.

The latter is a village and post-office; the other village is Ludlow (formerly Jenckesville), on the Chicopee River, where there is a post-office and a station of the Athol Branch of the Boston and Albany Railroad. There is here a factory making meal-bags, one making jute cloth, and another, wadding. There are also three saw and grist mills in different parts of the town. The leading occupation is farming. The aggregate value of the products of the 154 farms in 1885 was $203,039. There is one hank for savings. The valuation of the town in 1888 was $826,744, with a tax-rate of $13 on $1,000. The number of dwelling-houses was 306; the population 1,649; and the legal voters numbered 305.

The Hubbard Memorial Hall, recently completed, is a convenient and handsome building. There are primary, intermediate and grammar schools. These occupy ten buildings valued at nearly $25,000. The library of the Ludlow Manufacturing Company is the chief library in the town, and contains about 1,500 volumes. The church edifices are the Methodist and the First Congregational at the Centre . and the Union Church of Christ (also Congregational) at Ludlow. This town sent 130 men into the service during the war of the Rebellion, and has erected a beautiful monument in honor of those lost.

The territory of Ludlow was formerly a part of Springfield, called Stony Hill. On February 28, 1774, it was established as the district of Ludlow; and was made the town of Ludlow by the General Act of August 23, 1775. Its name was probably in memory of the town of Ludlow, in Shropshire County, England. Its settlement was commenced about 1750. The first meeting-house was erected in 1783, at a cost of $1,500, together with material and labor furnished by the people. The first pastor, the Rev. Antipas Steward, was ordained November 27, 1793. The Second Congregational church was established at Jenckesville (now Ludlow), January 24, 1847; and on January 20 of the ensuing year the Rev. William Hall was ordained as the first pastor. The Methodist church was organized in 1827; and the Rev. D.D. Fiske was the first minister.

The falls of Wallamanumps, on Chicopee River, were a favorite resort of the Indians. The water here descends 42 feet in a distance of 100 rods; and the aspect of the rapid current rushing along between the wild and precipitous banks is very fascinating. The extremity of a wooded eminence below the falls is called the "Indian Leap." It rises abruptly from the river to the height of about 75 feet; and it is related that a party of Indians, being suddenly surprised upon the rocky point, leaped over the precipice, and perished in the river.

Visit Ludlow, Massachusetts, USA
Discover the people who lived there, the places they visited and the stories they shared. 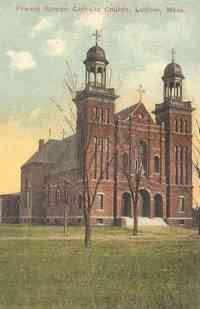