Whately is a pleasant farming town lying on the west bank of the Connecticut River, in the southern border of Franklin County, about 116 miles west of Boston and 10 miles south of Greenfield. The Connecticut River Railroad and the New York, New Haven and Hartford Railroad run through the town. The base-line of the Trigonometrical Survey of the State lies across the eastern section.

Conway and Deerfield bound the town on the north; Sunderland, on the east; Hatfield, on the south; and Williamsburg and Conway, on the west. The northern line is irregular. The assessed area is 12,211 acres; of which 2,807 are forests of chestnut, maple, beech and spruce. The land is low and swampy next the Connecticut, but high and broken in the west. Mount Esther, in the north of the northwest section, has an altitude of 995 feet; and at the southwest is another elevation called Grass Hill. The scenery is further beautified by Belden's, Moore's and Bardwell's ponds. Mill River (called by the Indians Capawong) flows south through Whately (centre village and post-office), receiving, near the south line, West Brook, which runs diagonally across the western section, and on which is situated the other village. West Whately — also a post-office. Roaring Brook and Popple-hill Brook, in the north and northwest, are the other considerable streams. In the eastern part of the town are several chalybeate springs. Whately Glen and Warner's Glen have a local celebrity for picturesque beauty and impressiveness. Lower sandstone and calciferous mica-schist constitute the geological basis. Veins of galena have been found in the western part; and a stratum of umber and sienna was discovered here in 1864.

The yield of apples is large, amounting in 1885 to $9,547 from 6,906 trees. Pears, quinces and berries are also a source of much profit. Maple sugar and molasses are regular annual products; and there are 265 sugar-houses in the town. There were also 97 barns for tobacco. The crop of this plant in the year mentioned was valued at $28,577. The number of neat cattle was 1,313. The value of the entire product of the 151 farms was $198,959. Two or more saw mills, a broom shop employing 15 persons, a hoop shop employing seven, constitute the largest manufacturing establishments. Other manufactures are carriages, straw and tobacco goods, and metallic articles. The value of all goods made was $42,236. The population was 999; of whom 277 were legal voters. The valuation in 1888 was $396,056, with a tax-rate of $14.50 on $1,000.

There were 201 assessed dwelling-houses, The six public school-houses were valued at $4,200. There are a high school, a. town hall, a town library of about 1,000 volumes, and a Congregationalist church.

This town was settled about the year 1735, by Lieut. Ebenezer Bardwell and others. It was then a part of Hatfield; from which it was detached and incorporated, April 24, 1771. The name was adopted in honor of Thomas Whately, who was a friend of Thomas Hutchinson, at this time the royal governor. The first church was organized in the year of the incorporation, and the Rev. Rufus Wells was the first minister. The town furnished 82 soldiers for the Union cause in the late war.

Visit Whately, Massachusetts, USA
Discover the people who lived there, the places they visited and the stories they shared. 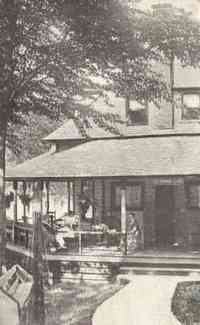