Warwick is a large, somewhat mountainous, farming and lumbering town forming the northeastern corner of Franklin County, 87 miles west by northwest of Boston. Warwick (centre) is the post-office and the village.

The station of the Fitchburg Railroad in Wendell is 6 miles south of Warwick centre; and that of the New London and Northern, at Northfield village, is about seven miles west. Royalston is the boundary on the east; Orange, on the southeast and south; Erving and Northfield, on the west; and Winchester and Richmond, in N. H., on the north. The assessed area is 22,489 acres. There are above 12,500 acres of forest, containing the usual flora of the region.

The farms number 144; and the value of their aggregate product in 1885 was $90,528. Fruits and berries bear their usual proportion; and there was a large product of maple sugar and molasses. Lumbering largely engages the people in the winter season. There were, in 1885, eight saw-mills and two wooden box factories. Their products were house lumber, chair-stock, staves, broom-handles and wood for brushes. The value of the wooden goods made was $20,054. A boot and shoe factory turned out its product to the value of $20,000. Various food preparations amounted to $5,525. The entire manufactured product reached the sum of $46,579. The population was 662; of whom 181 were legal voters. The valuation in 1888 was $280,170, with a tax-rate of $16.50 on $1,000. The public school-houses were valued at $3,500. Warwick Free Library contains nearly 3,000 volumes. The churches are one each of the Baptists, Congregationalists and Unitarians. The Rev. Leonard Hedge, first minister of the town, was ordained in 1760.

The Indian name of this place was Shaomet. By the white people it was first called "Roxbury Canada," because the territory was granted to the descendants of 39 soldiers who went from Roxbury and Brookline in the expedition to Canada in 1690,-- all of whom perished except one. The place was first settled in 1744. On February 17, 1763, it was incorporated as a town, being named in honor of the Earl of Warwick.

The geological structure of the town is calcareous gneiss, with a small section of granite in the southern part, and a very extensive ledge of freestone near the centre. There are striking indications of abundant beds of iron-ore; and copperas and graphite (black lead) are found. Radiated tourmaline of singular beauty is found in large quantities on Mount Grace, near the centre. A curiosity of the town is the so-called "Indian Mortars," elsewhere called "pot holes," -- nearly round holes in the solid rock, a foot or two in diameter and three or four deep. Such are formed by the action of water-currents acting on stones. As in some other instances, these are at a great height above the present valleys. Their location is on the water-shed between Miller's River at the south and the Ashuelot on the north. The central portion of the town is drained by Mountain Brook, flowing north, and Moss and Orcutt's brooks and their branches, flowing south. The eastern part is drained by Tully River, an affluent of Miller's River; and the northwest by Mill Brook, flowing through Northfield to the Connecticut. About the centre, and in the west and southwest, are several pretty ponds.

Two of the captives taken by the Indians at the sacking of Lancaster in 1676 were the wife of Rev. Mr. Rowlandson and her infant child Grace. The child died soon after crossing Miller's River; but the mother still clung to the lifeless little body until she reached the base of a mountain in this town, some ten miles further. Here, overcome by fatigue, she reluctantly consigned the child to a hasty grave. The mountain has ever since borne the name of "Mount Grace." in memory of the innocent whose tomb it became in that early time. The height of this mountain is 1,628 feet; and it is one of the most beautiful elevations in the State.

Warwick furnished 99 soldiers for the Union service in the late war, and lost 27. Their names are inscribed on an elegant shaft of granite, erected in 1867 at a cost of $1,336.

Visit Warwick, Massachusetts, USA
Discover the people who lived there, the places they visited and the stories they shared. 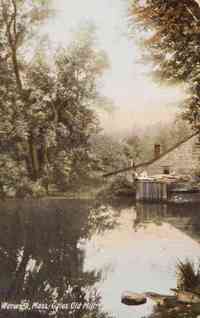