Townsend is a large town of unusual scenic beauty in the northwesterly section of Middlesex County, 45 miles northwest of Boston. Pepperell and Shirley bound it on the east, Lunenburg on the south and southwest, Ashley [Ashby] on the west, and Mason and Brookline, in N.H., on the north.

Harbor, Little Goose, Davis, Worden and Walker ponds beautify the town. The Squannacook River, formed in the western part of the town, flows across its midst southeasterly, affording, with its numerous tributary brooks, many useful powers. Along its valley runs the Peterboro and Shirley Branch of the Fitchburg Railroad, having stations at the villages of Townsend Harbor, Townsend (centre) and West Townsend, which are also post-offices. Other villages are Townsend Hill in the northeast and Rogersville in the southwest. Several beautiful eminences beautify the landscape along the southern and western borders, while Barker and. West hills, in the northern section, are wild and woody heights; while over the long range of Townsend Hill, in the northeast, is strung the interesting village of that name. The principal rock is ferruginous gneiss, Merrimack schist and the St. John's group. The soil is sandy in some parts, and a light loam in others. The assessed area is 19,197 acres; nearly one half of which consists of forests of nine, chestnut, hickory and maple.

The 198 farms yielded in 1885 an aggregate product of $111,635. Apples and strawberries are a considerable crop. Raspberries were picked to the quantity of 14,392 quarts, worth $2,320. Blueberries and other small fruits are numerous. There were two or more saw mills, employing 29 men; two or three grist mills, a furniture factory employing 9 persons, a leather-board mill employing 14, a cooperage and a twine factory. Some of the goods made were wooden boxes, barrels, kegs, pails, cabinets, carriages, and metallic articles. The value of the entire manufactured product, as given, in the census for 1885, was $235,481. The Townsend National Bank has capital stock to the amount of $100,000. The population was 1,846; of which 543 were legal voters. The valuation in 1888 was $984,420, with a tax-rate of $12.30 on $1,000. There were 498 taxed dwelling-houses.

There are a town-hall, a public library containing about 2,000 volumes, a high school, with the lower grades, and 12 public school-houses valued at some $12,000. The "Tocsin" and the "Transcript" are the weekly journals published here. The four churches are Congregationalist, Baptist, Methodist and Roman Catholic. The centre and adjacent villages are busy and interesting places, having their streets adorned with elm and maple trees, many of which are a hundred years old.

Townsend, in its early period the north part of the district called Turkey Hills, was incorporated June 29, 1732; being named in honor of Charles Townsend, viscount, of the king's privy council. A church was organized October 16, 1734, and the Rev. Phineas Hemenway ordained pastor. The town was formerly noted for an excellent female seminary, whose influence may still be observed in the society. John Hubbard (1759-1810), and Daniel Adams, M.D. (1773-1864), authors of educational works, were natives of this town.

Visit Townsend, Massachusetts, USA (Townsend Harbor)
Discover the people who lived there, the places they visited and the stories they shared. 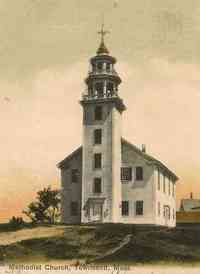