From the Utica Observer of Thursday.

On Sunday afternoon about 3 o'clock, a most alarming fire broke out in the stable of Messrs. DODGE & HART, in rear of buildings on Seneca Street, south side of the canal. The fire spread with such uncommon rapidity, that in a few minutes a number of buildings surrounding the one in which it originated, were enveloped in flames. Our firemen were prompt in their attendance, and but a short time elapsed before all the fire companies and engines were in active operation.

The skill which they exhibited, and the prompt and effective orders of the Chief Engineer and fire wardens, soon arrested its progress, but not until a large amount of property had been destroyed.

The following is a list of the buildings burnt and the names of the occupants so far as we have been able to ascertain them.

Store shed owned and occupied by Messrs. DOWS & HULBUT, together with a considerable quantity of pork, salt, cotton, &c.

A coach shop occupied by MATHER & BRIGGS; second story by MR. BALL, as a paint shop, owned by LUKE DODGE.

A brick carriage house, together with a shoeing shop, occupied and owned in part by L. DODGE; second story by MR. WOODRUFF as a trimmer's shop.

A wooden building occupied by MR. BUSHNELL, as a smith's shop.

A small building occupied by S. H. BUTLER, as a stone cutters shop.

A small dwelling owned by MR. A. MUNSON.

We understand there was no insurance on any of the above property, and that the loss will be severe to most of the occupants. MR. L. DODGE, it is said, has sustained a loss of about $3000. The individual losses of others, we are unable to state.

The extensive warehouses of Messrs. DOWS & HULBUT, were much damaged, and goods more or less injured. We learn, however, that they were insured on their warehouses to an amount sufficient to cover the loss.
MR. DODGE, in whose building the fire orginated has informed us, that the fire was the work of an incendiary, and thinks he saw the person as he made his escape from the stables.

During the fire, a young man by the name of SCOTT, had his pocket ripped open and four ten dollar bills of the bank of Utica taken from it. He had laid off his coat and was busily engaged at the fire, when the money was stolen. We understand the money was given him by a friend to take to a person in Wayne Co. and as a safe precaution, they sewed the money with other papers into his pocket.

Several persons had their coats stolen after they had laid them off for the purpose of saving them from getting injured.

The editor of the Utica Sentinel estimates the loss at $5,500. The same paper states that several persons were considerably injured, and that a MRS. WHEELER died on Sunday evening, in consequence of fright and exhaustion.

Visit Utica, New York, USA
Discover the people who lived there, the places they visited and the stories they shared. 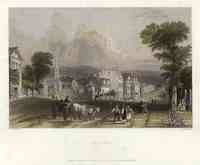