Auburn, Me., May 16. (AP) - Restoration of a gaping hole in its New Auburn section where 248 buildings including the homes of one-twelfth of the city's population were destroyed by fire yesterday with loss exceeding $1,000,000 was the problem facing this city today. The homeless most of whom were of foreign extraction - workers in the mills of Lewiston, across the Androscoggin River - were estimated by City Manager Frederick Ford to number approximately 1500.

The section of the city thickly covered with tenement buildings was more congested than usual, the city manager said, many families sharing their quarters because of economic conditions. Some of the structures, he said, housed half a hundred families. Most of the victims, possibly three-quarters of the number, Ford estimated, found shelter with relatives and friends in other sections of the city. The others were being cared for by relief agencies.

Four companies of National Guardsmen, serving as civil officers, still patrolled the fire-swept district. Today and all last night spectators and persons whose homes had been destroyed, were barred from the area. Only officials and workmen laboring to clear the debris strewn streets were permitted inside the fire lines.

The blaze started about 1 p.m. in Pontriand's Garage, from what cause firemen had been unable to determine. A high wind flung the flames in three directions, igniting closely packed tenement houses. The tinder-dry structures, three to five stories high, burst into flames with incredible rapidity. A triangular space containing nearly 20 buildings was a roaring furnace almost before the first hose line was laid.

Vast billows of smoke, laden with burning brands and embers, rose from the flames, bits of burning material were carried for blocks, setting fires in advance of the main blaze and isolating whole blocks of buildings - all doomed to ultimate destruction.

The tenants of the close-packed buildings poured into the streets, dragging their household goods behind them. Practically all the victims were of foreign extraction, French, Greek, Italian.
The streets were a bedlam of chatter, frantic refugees running to and fro in confusion, ignorant of the direction in which safety might be found.

The fire started near a street junction and spread fanwise across four streets. It climbed up from the tenement section, spreading to higher ground parallel to the Androscoggin River.

Here it sped along, sweeping scores of single residences and two-family houses before it.

The Wilson School, one of the city's buildings, fell prey to the flames little more than 20 minutes after the pupils had been dismissed.

St. Louis School, a parochial institution, had been razed a short time before. Its blackened brick walls with gaping windows appeared and disappeared among the sweeping swirls of smoke only three blocks away.
The Beth Abraham synagogue, near the point of origin of the fire, was swept by flames early in the conflagration.

Fire departments came to the aid of stricken Auburn from cities as much as 30 miles distant. Portland, Augusta, Rumford, Norway and Gardiner, were among the communities to send aid.

Low water pressure hampered much of the fire fighters' efforts while new blazes cropping up in distant places carried the fight to new fronts faster than apparatus could be moved about to meet it.

Above the roar of the flames, the throbbing of pumpers and the wailing of sirens there occasionally rose the deep, booming rumble of an explosion in underground gasoline tanks and oil storage containers.
At the height of the fire, embers carried across the river started three blazes in Lewiston. A house owned by Edward Goff was destroyed in one of the satellite fires, while two woods fires at widely separated points called Lewiston apparatus, busy helping its neighboring community, back into its own precincts.

After spreading its path of destruction for more than five hours, the fire finally met an incombustible barrier in an extensive graveyard at the very end of the devastated area.

Neither hospitals nor police had received any reports of serious casualties, which officials considered almost miraculous in view of the congestion in the district.

Minor casualties, lacerations and bruises, firemen and householders overcome by smoke, were plentiful.

The Red Cross diverted from its efforts to raise funds for the assistance of the victims of the $2,000,000 Ellsworth fire, was soon on the scene.

The refugees, who were not cared for by relatives, were sheltered in churches and public halls and provided with food.

Guardsmen armed with rifles atood at the bridges leading into the district and others patrolled the streets as a safeguard against looting.

Visit Auburn, Maine, USA
Discover the people who lived there, the places they visited and the stories they shared. 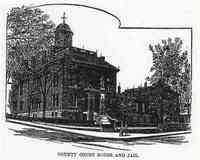