Groton is an ancient, handsome and nourishing town, situated in the northwesterly section of Middlesex County, about 32 miles northwest of Boston. It is bounded on the north by Pepperell and Dunstable, on the east by Tyngsborough and Westford, on the south by Ayer, on the west by Shirley and Pepperell, which are separated by a long western horn of Groton having Townsend at its western end. The assessed area is 19,770 acres; of which 6,368 are woodland.

Through the town north and south, with a station at the centre, runs the Worcester, Nashua and Portland Division of the Boston and Maine Railroad; while the Peterboro' and Shirley Branch of the Fitchburg Railroad runs through the town northwestward, having a station, at West Groton; at East Groton is the Ayer and Lowell Branch of the Boston and Maine, and the Acton Branch of the Concord Railroad; while Ayer Junction furnishes connection with points south, east and west. Factory Village also is conveniently near the central stations.

The scenery is beautifully diversified by hill and valley, lake and river, forest and cultivated farm. Among the conspicuous eminences are Gibbet Hill at the centre; the Chestnut Hills, running northeasterly toward Dunstable; Horse Hill, on the borders of that town; Bear Hill, midway of the eastern line; and the Throne, a noted hill in the long angle forming the northwestern part of the town. There is also a group of hills east of the centre which afford fine views of the adjacent landscapes. The chestnut, various kinds of oak, white and hard pine, lock and white maple, white birch and walnut, grow thriftily about these rocky elevations; while on the lower lands the elm is abundant. Of the several beautiful ponds, Martin's, near the centre, Baddacook (containing 103 acres) and Whitney's (71 acres) are the largest. In addition to their several outlets is Squannacook River, which forms the southwestern line of the town, and joins the larger Nashua at the border of Ayer. The latter river sweeps across the town northward through a beautiful intervale, then forms for several miles the tortuous boundary with Pepperell. James Brook and Gratuity Brook, rising near the centre, now—the first southerly, the other northwesterly—into the Nashua River. Wrangling Brook, by a very circuitous course, in West Groton, runs also into the Nashua; while Unkety Brook and Cow-pond Brook now northerly, the first through Dunstable into the Nashua River, and the latter into Massapoag Pond, at the angle of Groton, Dunstable and Tyngsborough.

The geological formation of the town is Merrimack schist, granite and the St. John's group. There are several quarries of building stone in the town, and one of scapolite. The soil is generally a clayey gravel, which yields well. The 174 farms, in 1885, had a product valued at $234,748. The number of fruit trees is upwards of 30,000; and the crop from these and the small fruits is proportionally large. The water-power on the numerous streams has long been made practically useful. Two large paper factories are now operated here; while another establishment turns out leather-board in large quantities. The number of people employed in these factories is about 120. Other articles made are boots and shoes, carriages, leather, various wood and metal goods, leather and food preparations. The aggregate value of the manufactures in the last census year was $355,635. The valuation in 1888 was $2,771,757, with a tax-rate of but $5.50 on $1,000.

The public schools are graded, and occupy 14 buildings, valued at some $30,000. The town-hall, the Butler schoolhouse, the Groton School and the Lawrence Academy (the last two, private institutions) are notable for their excellence. There are several fine residences which add greatly to the general beauty of the place.

All the villages have an agreeable trimness about yards and grounds. with well-kept streets, extensively shaded with fine trees, many of which have been growing in their places for a century. The central village is the seat of the Lawrence Academy, an ancient and well-endowed institution, in which many youths have been well fitted for college and for the different vocations of life. It was founded in 1793, and incorporated under the name of "The Groton Academy;'' but, in consideration of the munificent donations of Messrs. William and Samuel Lawrence, it received in 1846 its present name. The Groton School is a new institution, incorporated in 1885, but its opening years are full of promise. Each of the private schools has a library and the Groton Public Library has a collection of nearly 5,000 volumes. The "Citizen" and the "Landmark " serve well the office of weekly village newspapers. There are church edifices here of the Congregationalists, Unitarians, Baptists, and of the Episcopal Church, and there is more than usual interest in their services.

The Indian name of this territory was Petapawag. It was granted to Deane Winthrop and others, and incorporated May 29,1655. The name of "Groton" was probably given to it in memory of the possessions of the Winthrop family in Suffolk County, England. It then embraced an area of eight miles square, from which have since been taken parts of the towns of Dunstable, Westford, Littleton, Harvard, Shirley, Pepperell and Ayer. Among the first settlers were John Lakin, Richard and Robert Blood, and William Martin. The Rev. Samuel Willard, ordained in 1663, was the first minister. He was afterward minister of the Old South Church in Boston, and, later, President of Harvard College.

The people suffered greatly during Philip's War, and for a while the settlement was abandoned. Dr. Timothy Dwight thus describes the depredations of the Indians: —

"In 1676 a body of savages entered it on the 2d of March, plundered several houses, and carried off a number of cattle. On the 9th they ambushed four men who were driving their carts, killed one, and took a second; but while they were disputing about the manner of putting him to death he escaped. On the 13th, about four hundred of these people assaulted Groton again. The inhabitants, alarmed by the recent destruction of Lancaster, had retreated into five garrisoned houses. Four of these were within musket-shot of each other. The fifth stood at the distance of a mile. Between the four neighboring ones were gathered all the cattle belonging to the inhabitants.

"In the morning, two of the Indians showed themselves behind a hill near one of the four garrisons, with an intention to decoy the inhabitants out of their fortifications. The alarm was immediately given. A considerable part of the men in this garrison, and several from the next, imprudently went out to surprise them; when a large body, who had been lying in ambush for this purpose, arose instantaneously, and fired upon them. The English fled. Another party of the Indians at the same time came upon the rear of the nearest garrison, thus deprived of its defence, and began to pull down the palisades. The flying English retreated to the next garrison; and the women and children, forsaken as they were, escaped, under the protection of Providence, to the same place of safety. The ungarrisoned houses in the town were then set on fire by the savages.

"In a similar manner they attempted to surprise the solitary garrison; one of their people being employed to decoy the English out of it into an ambush in the neighborhood. The watch, however, discovering the ambush, gave the alarm and prevented the mischief intended. The next day, the Indians withdrew; having burnt about forty dwelling-houses and the church, together with barns and out-houses."

Their leader was John Monoco, who was afterward captured, taken to Boston and hanged.

Visit Groton, Massachusetts, USA
Discover the people who lived there, the places they visited and the stories they shared. 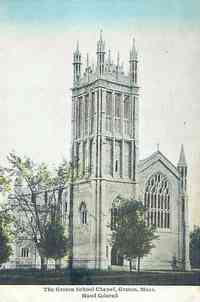