Under Henry IV the city enjoyed a certain freedom and prosperity until the 1620s, but the city entered in conflict with the central authority of the King Louis XIII with the Huguenot rebellion (1622). A fleet from La Rochelle fought a royal fleet of 35 ships under the Charles de Guise in front of Saint-Martin-de-Ré, but was defeated on 27 October 1622, leading to the signature of the Peace of Montpellier.

In 1625, a new Huguenot revolt led by Duke Henri de Rohan and his brother Soubise led to the Capture of Ré island by the forces of Louis XIII. Soubise conquered large parts of the Atlantic coast, but the supporting fleet of La Rochelle was finally defeated by Montmorency, as was Soubise with 3,000 when he led a counter-attack against the royal troops who had landed on the island of Ré.

Cardinal Richelieu at the Siege of La Rochelle, Henri Motte, 1881.

Following these events, Louis XIII and his Chief Minister Cardinal Richelieu declared the suppression of the Huguenot revolt the first priority of the kingdom. The English came to the support of La Rochelle, starting an Anglo-French War (1627-1629), by sending a major expedition under the Duke of Buckingham. The expedition however ended in fiasco for England with the Siege of Saint-Martin-de-Ré (1627). Meanwhile, cannon shots were exchanged on 10 September 1627 between La Rochelle and Royal troops. This resulted in the Siege of La Rochelle in which Cardinal Richelieu blockaded the city for 14 months, until the city surrendered and lost its mayor and its privileges.

The remaining Protestants of La Rochelle suffered new persecutions, when 300 hundred families were again expelled in November 1661, the year Louis XIV came to power. The reason for the expulsions was that Catholics deeply resented a degree of revival of Protestant propriety in the city.

The growing persecution of the Huguenots culminated with the Revocation of the Edict of Nantes by Louis XIV in 1685. Many Huguenots emigrated, founding such cities as New Rochelle in the vicinity of today's New York in 1689. La Rochelle, and the siege of 1627 form much of the backdrop of the later chapters of Alexandre Dumas, père's classic novel, The Three Musketeers.

La Rochelle and the New World

Because of its western location, which saved days of sailing time, La Rochelle enjoyed successful fishing in the western Atlantic and trading with the New World, which served to counterbalance the disadvantage of not being at the mouth of a river (useful for shipping goods to and from the interior). Its Protestant shipowning and merchant class prospered in the sixteenth century until the Wars of Religion devastated the city.

Robert de La Salle departed from La Rochelle, France, on July 24, 1684, with the objective of setting up a colony at the mouth of the Mississippi, eventually establishing Fort Saint Louis in Texas.

The city eventually lost its trade and prominence during the decades spanning the Seven Years' War, the French revolution and the Napoleonic Wars. During that period France lost many of the territorial possessions it had in the new World, and also saw a strong decrease in its sea power in the continuing conflicts with Britain, ultimately diminishing the role of such harbours as La Rochelle. After abolitionist movements by some such as Samuel de Missy, the slave trade of La Rochelle would end with the event of the French Revolution and the war with England in the 1790s, the last La Rochelle slave ship, the Saint-Jacques being captured in 1793 in the Gulf of Guinea.[25] In February 1794, the National Assembly legislated the Universal Emancipation decree, which effectively freed all colonial slaves.

In 1809, the Battle of the Basque Roads took place near La Rochelle, in which a British fleet defeated the French Fleet of the Atlantic.

Visit La Rochelle, Charente-Maritime, Poitou-Charentes, France
Discover the people who lived there, the places they visited and the stories they shared. 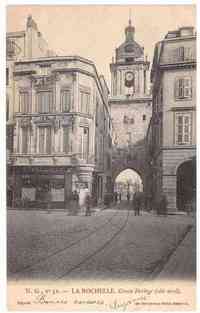