Montreal (CP) - Reports conflicted today as to the number of construction workers who died Wednesday night when a coffer dam collapsed at the Riviere des Prairies. Police in Laval des Rapides said they believed 18 men were killed, but an official of a construction firm set the toll at about 11.

The dam buckled under pressure of heavy chunks of ice broken away by a recent thaw. The Riviere des Prairies skirts Montreal's north shore.
About 20 men were working at the bottom of the dam when the north wall was struck by ice floes and collapsed.

EMERIC LEONARD, assistant superintendent of Dufresne Construction Company, said today he has no information yet as to the exact number of men who were killed.

A police office in Laval des Rapides said he believed 18 had been killed. But MR. LEONARD, said: "I think the number is closer to 11."
Two or three men escaped from within the dam when it buckled. Three others saved themselves after the shock tossed them from the top of the dam into the currents of the river - known in Montreal as the Back River. None was severely injured.

"It all happened in about 30 seconds," LAURENT THEORET, 23, of St. Eustache, Que., said from a hospital bed Wednesday night. "I still don't know how I managed to escape."

"The ice came down and hit it and the whole thing collapsed," said a statement from PAUL DUFRESNE, president of the Dufresne Construction Company engaged in throwing a bridge across the river for a six-lane tolls highway to the Laurentian Mountains.

"We think about 10 men were killed, or possibly 11. Some got out bet we don't know if they left without punching their cards." Definite word would involve checking the whole construction payroll of about 450 men.

The company called in frogmen to help retrieve the bodies and set today for the start of the grim hazardous task after an engineers' survey, made Wednesday night in the glare of floodlights.
The tragedy happened at about 5:15 p.m. EST.

Only the previous night, a wooden form prepared for concrete pouring had burst into flames on the bridge site, endangering momentarily the lives of 20 workmen atop it. Officials said damage was at least several thousand dollars and construction would be set back several weeks. 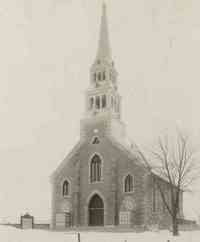