Add YOUR Family To This Page

Journey back in time to Breslau, Silesia, Prussia, Germany

Are you from Breslau? Do you have ancestors from there? Tell us YOUR story! 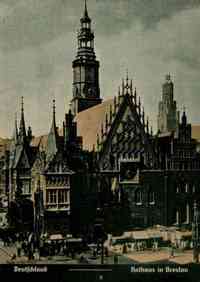 The Prussian area known as Silesia consisted of two regions, Upper Silesia (Oberschlesien) and Lower Silesia (Niederschlesien). It was bordered on the west by Saxony, on the north by Brandenburg, on the east by Poland, and on the south by Czechoslovakia. The Sudenten Mountain range ran along its southern border. Two major rivers, the Oder and the Neisse ran through it. Two major cities were Breslau and Görlitz.

As a result of various wars, Silesia is now divided between three different countries. The largest portion of Silesia is in modern-day Poland. A small portion of southern Silesia was ceded to Czechoslovakia in 1918 and is now in the Czech Republic. In 1945 as a result of the Potsdam Conference, the line between Poland and East Germany was drawn along the Neisse river dividing Görlitz between East Germany and Poland. The portion of Görlitz that remained in Germany retained its name. The portion that went to Poland is now called Zgorzelec. The Polish name for Breslau is Wrocław.

There is MUCH more to discover about Breslau, Silesia, Prussia, Germany. Read on!

Ancestors Who Were Born or Died in Breslau, Silesia, Prussia, Germany

We currently have information about ancestors who were born or died in Breslau.

View Them Now (sorted by year of birth)

Ancestors Who Were Married in Breslau, Silesia, Prussia, Germany

We currently have information about ancestors who were married in Breslau.

Not the place you are looking for? Try again!

Search for Your Family by Place

Are you from Breslau? Do you have ancestors from there? Tell us YOUR story!

If you'd like to be contacted by others who have ancestors from Breslau, leave a message here!
The comments you read here belong only to the person who posted them. We reserve the right to remove off-topic and inappropriate comments.