Most of us have heard of the cremation of human bodies after death, although few have seen the process.

Undertaker Samson of Lewiston is familiar with it and he discourses interestingly upon the subject. He says that the idea of cremation to take the place of burial in the ground, is gradually growing in public favor, but adds that the youngest person now living in Lewiston and Auburn will probably have passed away before cremation takes the place of burials in this community. He believes, however, that it is one of the things that's coming. In many of the larger cities people who believe in cremation have societies whose object is to educate public sentiment on the subject and make the idea popular. In New York city cremation has come to be quite the thing in certain localities. In Pittsburg, Mr. Samson has a cousin who is an undertaker and who does the second largest business in the United States. Mrs. Samson learned the business there and that is where he became familiar with the process of cremation. His cousin occupies a large brick block and the crematory is in the basement. An elevator runs from the basement to the upper floors. When the Pittsburg undertaker has a funeral where the relatives desire cremation, the furnace in the basement is heated to a “White Heat.”

The funerals are held, for the most part, at the houses and churches as in case of burial, but many of them are held in the chapel of the first floor of the undertaking rooms, directly over the crematory furnace. When held at the house or the church the funeral procession leaves the remains at the the crematory, but when held at the undertaking rooms the leave taking is not until the body is about to be lowered to the furnace. The casket is at once placed on the elevator and taken to the basement. Here the body is removed and prepared for cremation. The casket is destroyed. The body is then placed on a steel slab and pushed into the fiery furnace. The slab runs on rollers and are operated with the greatest ease conceivable. The furnace doors close very quickly and no oder escapes.

When, after and hour, the furnace doors are opened and the steel slab is drawn out, all there is to be seen is the little pile of ashes. The ashes are taken up and put into a box. Sometimes the relatives call for them, but in most cases they are left with the undertaker.

Mr. Samson says that it is not an uncommon thing for relatives to request the privilege of going down the elevator with the body and of standing by as it is taken from the casket and pushed into the furnace.

Mr. Samson says that the idea of laying our friends at rest in the ground is to a large extent a matter of sentiment. We think of them as they appeared to us when we last saw them, not taking into account the process of decomposition, which at once commences. He thinks that if people could see the bodies after decomposition has been at work several months, the tendency would be to change in sentiment in favor of cremation. He does not, however, anticipate a popular change from burials to cremation for many years, to say the least. It is a reform (for reform is what many call it) that will come about very slowly.

There are people in Lewiston and Auburn who favor cremation in the place of burial, and who affirm that they should adopt it in case of death in their families, provided there were a local crematory or recognized standing. The writer was startled the other day to hear a well-known Auburn man remark that if there had been a local crematory in operation at the time of the death of his only child a few months since, he should most certainly have had the body cremated. “And I know of others who entertain the same views,” he remarked. The writer talked with the gentleman a long time, and was impressed with his earnestness. At the close of the interview he handed us and article printed in “The Casket,” and undertaker's journal, and written by Dr. W. R. Burr of Auburn, Ky., favoring cremation from a sanitary standpoint.

“For those who have witnessed the ghastly spectacle of a modern funeral, no description of that barbarous rite is necessary. Who has not seen it all – the darkened room, stifling with mingled odors of flowers and disinfectants; the sombre, hideous casket, the awful ceremony of screwing down the lid over the beloved face; the black array of pall bearers; the long, slow, mournful journey to the desolate, disease-breeding cemetery; the dark, damp, yawning pit, the sickening thud of the earth, as dust returns to dust? Oh, could the most savage race invest death with more horrors than this frightful custom of the civilized world? Then follows the long process of decay, the darkness, the gloom, the weight of earth upon the breast, the grave worm slowly eating his slimy way into the flesh which thrilled under our warm kiss – God, are we not cruel to our dead?”

“Compare this with the beautiful ceremony of cremation. A snowy cloth envelops the dead, a door swings open noiselessly, and the iron cradle, with its burden clothed as for the nuptial bed, rolls through the aperture and disappears in a glory of crimson light, as a dove sails into the summer sunset skies and is lost to view. There is no smoke, no flame, no odor of any kind. Nothing comes in contact with the precious form we have loved but the purity of intense heat and the splendor of a great light. In a few hours, swiftly, noiselessly, with no repulsive or ghastly features, the earthly part of our dear one is reduced to a small heap of snowy ashes. All hail the dawn of a newer and higher civilization and simplicity of cremation for the complicated and dreadful horrors of burial!”

Dr. Burns puts up a strong argument for cremation, and says that superstition and sentiment should be side-tracked and science given the right of way. “The day will come,” says he, “although this generation may not see it, when cremation will be the universal practice and a potent source of infection and death will be wiped out.”
Lewiston Saturday Journal, Lewiston, Maine, January 2, 1897 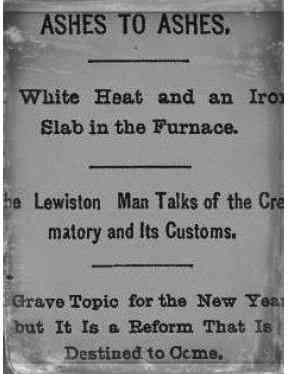