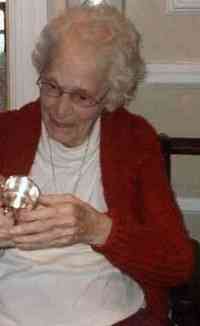 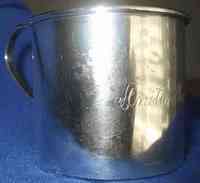 Anita was born in Brooklyn in 1921. Three years later, Lou was born in Chicago. Fast forward 89 years to 2013. How did Lou, who has never heard of Anita, end up with Anita's silver baby cup in Pennsylvania? How did we find it?

Lou lives in Pennsylvania. Her family lives in California. Living alone at 89 years old is rather challenging, especially when your family is completely across the country. Realizing this, Lou decided it was time to relocate. Packing up a home containing years and years worth of accumulated treasures presented an additional challenge.

Gail wanted to see Lou before she left (and I wanted to meet her), so we took the 4 1/2 hour drive to Pennsylvania. We spent two wonderful days with her. We shared family stories, and even went to the place where George Washington crossed the Delaware! While chatting with us, Lou mentioned a silver baby cup, thinking it belonged to someone entirely different. We examined the cup and discovered Anita's name. We could not believe our eyes. How did Anita's cup ever end up here?

Upon further thought, we realized that had we not recently written our family history book, we never would have known Anita's name. Without our book and all the research associated with it, the cup would have been pushed aside and packed into another random box, perhaps on a journey to California, without any of us having any idea as to whom it belonged. Instead, Anita's cup is returning home to Anita! It has been "missing" for around 70 years!

Anita's mother, Beatrice, died in Brooklyn in 1943. At that time, Anita was around 22 years old. A year before her mother died, Anita enlisted in the Marine Corps, during the height of World War II. Our theory is as follows: Anita's parents were divorced. When Beatrice died, her family came and took control of her possessions. Her children went to live with their father. Beatrice's brother, Charles, was living in Rhode Island with his wife, Anne. Charles took the box containing his niece's silver cup back to Rhode Island. He intended to save the cup and return it to Anita when she came home. That never happened. Six months after the death of his sister, Charles died. It was April of 1944. At this point, the silver baby cup remained in a box in Rhode Island, now the possession of Charles' widow, Anne. If you're not already confused enough, Anne and Charles were not only husband and wife, but also first cousins. That's another story!

Anne survived many, many years after the passing of her husband, Charles. She died in Greenville, Rhode Island in 1971. We assume the cup remained in her possession all those years. She probably knew of Anita. She might have even met her at one time, but since the passing of Anita's mother, Anita and her siblings had fallen out of touch with their mother's side of the family.

What happened next? Since Anne and Charles never had children, we believe that Anne's sister, Rosalie, took control of Anne's possessions when she died in 1971. Rosalie lived in Pennsylvania. This is likely how the cup arrived in that state. Less than two years after the cup fell into the hands of Rosalie, she died. It was January of 1973, and the cup now belonged to her only son, Erdman. The cup remained in the possession of Erdman, and his wife, Lou. It is likely that Erdman had no idea who the original owner was, if he even thought about it at all. Erdman passed away in 2009. That leads us to today (2013), our visit to Lou's Pennsylvania home, and the discovery of the tarnished silver baby cup, engraved with Anita's name.

Fast forward a couple of weeks.

We are now in Buzzards Bay, Massachusetts, with Anita's brother, Bob, and his wife, Anne. The cup has been cleaned and carefully wrapped. It is heading for Anita.

Arriving at the nursing home where Anita lives, we couldn't help but notice how beautiful it is compared to other nursing homes we have been to. Our anticipation is growing.

Anita is sitting in a wheel chair in a nursing home corridor. Beside her, also in a wheel chair, is her best friend, Millie. Anita and Millie have been friends since World War II.

We approach Anita with cup carefully boxed, and introduce ourselves as her cousins. Anita looks at us with doubt because she has never seen nor heard of us before. We don't bother to try to explain because it is far too complicated.

As the box is opened and the cup is revealed, Bob points to Anita's name on the cup. At this point, Anita smiles as if her entire childhood came back to her in that very moment. While we will never know what she was thinking, the smile on her face said more than words. We watched as she showed the cup to Millie and the many interested nurses who gathered to hear the story. When Bob tried to put the cup in Anita's bedroom, she refused to let go of it. We wondered how long it was before she let it out of her hands.

We returned home to our laundry and dishes. This was certainly not an ordinary day. It's not often that we get a chance to bring such joy to someone we have never met.

About a month later, Anita passed away. We will always remember the day we made her smile. We hope her silver baby cup stays in the hands of her family for many years to come.