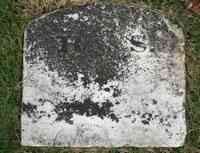 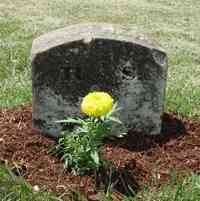 There are many mystery graves in the cemetery. We have found several. This is the story of one.

Last October (coincidentally Halloween), I discovered the grave of whom I thought might just be my g-g-g-g-grandmother who came to the U.S. from Prussia in 1853. The grave stone said "R.S." nothing else. It was located next to a person whom I knew to be her eldest daughter, Johanna. I took a photo. The quest for the truth began.

When my cousin, Gail, saw this photo, she immediately thought that the stone had tipped over. I never would have guessed that in a million years. Was this the person we thought it might be? Did the stone tip over? What was on the other side?

So off we went on an two-day journey to the cemetery, armed with shovels, rakes, dirt, mulch, flowers, fertilizer, jugs of water, blocks of wood... Our mission -- lift up this stone and see if there is anything on the back.

Carefully, we raised the stone (it is smaller than it looks), and discovered that nothing is on the back. HOWEVER, something is on the top -- it says "MOTHER"! Gail was right! This confirms to us that this is Johanna's mother, my g-g-g-g-grandmother and Gail's g-g-grandmother!

It was a busy day for us. While painting the cemetery with marigolds of various sizes and colors, we discovered what might very well be another stone - buried - six inches under. What other mysteries lie inside the cemetery? We know of several in plain sight, yet undocumented. We also know of one, concealed by time, six inches under.