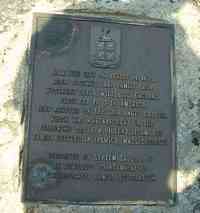 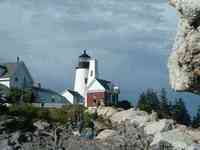 While searching for Thomas Burnham (1623, Norwich, Norfolk, England - 19 May 1694, Ipswich, Essex, Massachusetts), I read an article about him possibly being one of three brothers who came to America in 1635 from England on the ship Angel Gabriel. Angel Gabriel was wrecked on the coast of Maine at Pemaquid Point in an August storm, possibly known as the “Great Colonial Hurricane of 1635”.

My son, C****, was beginning his freshman year of high school. During orientation, he met a girl, D****. There was an immediate connection between them, so they began dating. D****’s family had a summer house on the beach in Maine. She invited C**** to visit for the weekend. Since C**** and D**** were only 14, D****’s mother, S*****, invited me to join them. The house was located a just few miles from Pemaquid Point in New Harbor, Maine. S***** had spent many summers there as a young girl. Her grandfather had owned the cottage and it was passed down through her family. She knew Pemaquid well and had many fond memories of time spent there. She had never heard the story of the Angel Gabriel. She asked a long-time resident about it and was directed to a small monument near the lighthouse she had frequented on many occasions.

“On the last Wednesday in May, 1635 (May 27th), the ship "Angel Gabriel" a strong ship of 240 tons, and carrying a heavy armament of 16 guns swung at her moorings in the King's Road, four or five miles distant from the city…. On her deck was "a company of many Godly Christians", some from other ships, bound for New England.”

“The Angel Gabriel was built by Sir Charles Snell of Kingston, St. Michaels, North Wilts, England, for Sir Walter Raleigh. It was completed around 1617. She was commanded in 1635 by Michael Hunt, who was part owner. The ship was described as ‘a strong ship, and well furnished with fourteen or sixteen pieces of ordnance, and therefore our seamen rather desired her company; but she is slow in sailing.’

The Angel Gabriel set sail on June 4, 1635 from Bristol, England bound for New England. She was accompanied by the lighter ship James. The Angel Gabriel, being heavier, fell behind and anchored in the outer harbor at Pemaquid at the time that the James anchored at the Isles of Shoals. A severe storm came up during the night with extreme tides, and the Angel Gabriel was torn from her anchorage and wrecked on the shore. One seaman and three or four passengers were lost, while two others had died on the voyage. The rest got safely on land, although much of their belongings were lost or damaged.”

“The Angel Gabriel's destruction affected many people but its impact was perhaps felt most strongly by her master and owner, Robert Andrews and his nephews, John, Thomas and Robert Burnham… The three brothers were sons of Capt. Andrews' sister, Mary and her husband, Robert Burnham. The three boys were put in the charge of their uncle, Capt. Andrews, for the voyage to America. Was their intention to settle in America? Or was it just to learn the ways of the sea from their uncle? Whatever their intentions may have been, after the Angel Gabriel was shattered on Maine's rocky coast, Capt Andrews and his nephews settled in the New World.”

The local story is that the Angel Gabriel sailed to America in 1635. It met its demise in on the rocks of Pemaquid Point an August storm (as have many other ships over the years). About 100 passengers were on board. Five people died. The survivors lost most of their belongings. One of the passengers had sailed to America in hopes of establishing a new home (possibly named John Bailey). His wife and children were left behind in England. They would be sent for when the home was established. The man survived the wreckage. After hearing news of the wreckage, his wife was afraid to take the journey. The man was also afraid to board a ship back to England. The couple died without ever seeing each other again.

The lighthouse at Pemaquid Point was built in 1826. A small museum opened in 1972. Outside, there is a plaque commemorating the loss of the Angel Gabriel. It was dedicated in 1965.

“Lt. Thomas Burnham also joined the Pequot Expedition in 1637 along with his brother, John. He was made Selectman in 1647; Sergeant of the Ipswich Company in 1664; made Ensign in 1665 and was commissioned as Lieutenant in 1683. He was Deputy to the General Court from 1683 to 1685 and on town committees. In 1667 he was granted the privilege of erecting a saw mill on the Chebacco River. He owned much land both in Chebacco and in Ipswich which was divided between his sons, Thomas and James upon his death.” --B.B. Burnham

From History of Ipswich, Essex, and Hamilton by Joseph B. Felt john-slaughter.rootsweb.com/ IpswichHistory