JOHN TYLER, the tenth President of the United States, and was born in Charles City County, Va., March 29, 1790. He was the favored child of affluence and high social position. At the early age of twelve, John entered William and Mary College, and graduated with much honor when but seventeen years old. After graduating, he devoted himself with great assiduity to the study of law, partly with his father and partly with Edmund Randolph, one of the most distinguished lawyers of Virginia.

At nineteen years of age, he commenced the practice of law. His success was rapid and astonishing. It is said that three months had not elapsed ere there was scarcely a case on the docket of the court in which he was not retained. When but twenty-one years of age, he was almost unanimously elected to a seat in the State Legislature. He connected himself with the Democratic party, and warmly advocated the measures of Jefferson and Madison. For live successive years he was elected to the Legislature, receiving nearly the unanimous vote of his county.

When but twenty-six years of age, he was elected a Member of Congress. Here he acted earnestly and ably with the Democratic party, opposing a national bank, internal improvements by the General Government, and a protective tariff; advocating a strict construction of the Constitution and the most careful vigilance over State rights. His labors in Congress were so arduous that before the close of his second term he found it necessary to resign and retire to his estate in Charles City County to recruit his health. He, however, soon after consented to take his seat in the State Legislature, where his influence was powerful in promoting public works of great utility. With a reputation thus constantly increasing, he was chosen by a very large majority of votes Governor of his native State. His administration was a signally successful one, and his popularity secured his re-election.

John Randolph, a brilliant, erratic, half-crazed man, then represented Virginia in the Senate of the United States. A portion of the Democratic party was displeased with Mr. Randolph’s wayward course, and brought forward John Tyler as his opponent, considering him the only man in Virginia of sufficient popularity to succeed against the renowned orator of Roanoke. Mr. Tyler was the victor.

In accordance with his professions, upon taking his seat in the Senate he joined the ranks of the opposition. He opposed the tariff, and spoke against and voted against the bank as unconstitutional; he strenuously opposed all restrictions upon slavery, resisting all projects of internal improvements by the General Government, and avowed his sympathy with Mr. Calhoun’s view of nullification; he declared that Gen. Jackson, by his opposition to the nullifiers, had abandoned the principles of the Democratic party. Such was Mr. Tyler’s record in Congress—a record in perfect accordance with the principles which be had always avowed.

Returning to Virginia, he resumed the practice of his profession. There was a split in the Democratic party. His friends still regarded him as a true Jeffersonian, gave him a dinner, and showered compliments upon him. He had now attained the age of forty-six, and his career had been very brilliant. In consequence of his devotion to public business, his private affairs had fallen into some disorder, and it was not without satisfaction that be resumed the practice of law, and devoted himself to the cultivation of his plantation. Soon after this he removed to Williamsburg, for the better education of his children, and he again took his seat in the Legislature of Virginia.

By the southern Whigs he was sent to the national convention at Harrisburg in 1839 to nominate a President. The majority of votes were given to Gen Harrison, a genuine Whig, much to the disappointment of the South, which wished for Henry Clay. To conciliate the southern Whigs and to secure their vote, the convention then nominated John Tyler for Vice-President. It was well known that he was not in sympathy with the Whig party in the North; but the VicePresident has very little power in the Government, his main and almost only ditty being to preside over the meetings of the Senate. Thus it happened that a Whig President and, in reality, a Democratic Vice-President were chosen.

In 1841, Mr. Tyler was inaugurated VicePresident of the United States. In one short month from that time, President Harrison died, and Mr. Tyler thus found himself, to his own surprise and that of the whole nation, an occupant of the Presidential chair. Hastening from Williamsburg to Washington, on the 6th of April he was inaugurated to the high and responsible office. He was placed in a position of exceeding delicacy and difficulty. All his long life he had been opposed to the main principles of the party which had brought him into power. He had ever been a consistent, honest man, with an unblemished record. Gen. Harrison had selected a Whig cabinet. Should he retain them, and thus surround himself with counselors whose views were antagonistic to his own? or, on the other hand, should he turn against the party which had elected him, and select a cabinet in harmony with himself, and which would oppose all those views which the Whigs deemed essential to the public welfare? This was his fearful dilemma. He invited the cabinet which President Harrison had selected to retain their seats, and recommended a day of fasting and prayer, that God would guide and bless us.

The Whigs carried through Congress a bill for the incorporation of a fiscal bank of the United States. The President, after ten days’ delay, returned it with his veto. He suggested, however, that he would approve of a bill drawn up upon such a plan as he proposed. Such a bill was accordingly prepared, and privately submitted to him. He gave it his approval. It was passed without alteration, and he sent it back with his veto. Here commenced the open rupture. It is said that Mr. Tyler was provoked to this measure by a published letter front the Hon. John M. Botts, a distinguished Virginia Whig, who severely touched the pride of the President.

The opposition now exultingly received the President into their arms. The party which elected him denounced him bitterly. All the members of his cabinet, excepting Mr. Webster, resigned. The Whigs of Congress, both the Senate and the House, held a meeting and issued an address to the people of the United States, proclaiming that all political alliance between the Whigs and President Tyler was at an end.

Still the President attempted to conciliate. He appointed a new cabinet of distinguished Whigs and Conservatives, carefully leaving out all strong party men. Mr. Webster soon found it necessary to resign, forced out by the pressure of his Whig friends. Thus the four years of Mr. Tyler’s unfortunate administration passed sadly away. No one was satisfied. The land was filled with murinurs and vituperation. Whigs and Democrats alike assailed him. More and more, however, he brought himself into sympathy with his old friends, the Democrats, until at the close of his term he gave his whole influence to the support of Mr. Polk, the Democratic candidate for his successor.

On the 4th of March, 1845, President Tyler retired from the harassments of office, to the regret of neither party, and probably to his own unspeakable relief. The remainder of his days were passed mainly in the retirement of his beautiful home—Sherwood Forest, Charles City County, Va. His first wife, Miss Letitia Christian, died in Washington in 1842; and in June, 1844, he was again married, at New York, to Miss Julia Gardiner, a young lady of many personal and intellectual accomplishments.

When the great Rebellion rose, which the State Rights and nullifying doctrines of John C. Calhoun had inaugurated, President Tyler renounced his allegiance to the United States, and joined the Confederates. He was chosen a member of their Congress, and while engaged in active measures to destroy, by force of arms, the Government over which he had once presided, he was taken sick and soon died. 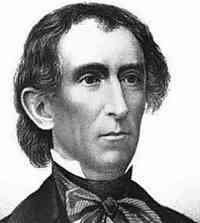 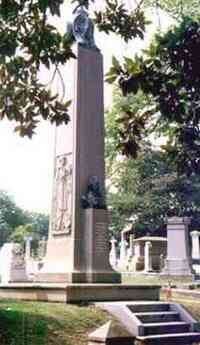