Mr. William F. Campbell, and old and respected merchant of Metcalfe, Ont., dropped dead in his home yesterday afternoon from what is supposed to be a stroke of apoplexy. Mr. Campbell had suffered a few days previously from muscular rheumatism, but his death was entirely unexpected.

The deceased was 66 years of age and a native of Canada. he leaves a wife, one son and an adopted daughter. The son, Mr. William Campbell, is a prosperous farmer of Manitoba, and the daughter is wife of Mr. William Surtees, a farmer of Osgoode.

The funeral will be held at 2 o'clock to-morrow afternoon to the Baptist church, Metcalfe. Rev. Mr. McQuarrie will officiate at the service.

Visit Metcalfe, Ontario, Canada (Osgoode)
Discover the people who lived there, the places they visited and the stories they shared. 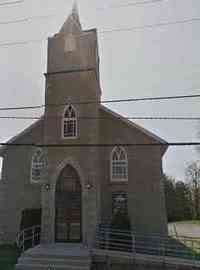