RIVIERE DU LOUP EN BAS or FRASERVILLE, a flourishing post village and watering place of Quebec, co of Temiscouata, situated on the S shore of the St. Lawrence, at the junction of the Grand Trunk and Intercolonial railways, and at the N.W. terminus of a railway in course of construction from Fredericton, 127 miles below Quebec. It has Roman Catholic and Episcopal churches, about 20 stores, several hotels and mills, 2 foundries, a tannery, a telegraph office, and a number of handsome villa residences. Pop. 1,511.

Visit Berthier-sur-Mer, Québec, Canada (Berthier-en-Bas) (Berthier)
Discover the people who lived there, the places they visited and the stories they shared. 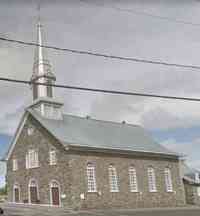