Coleraine, the most populous town, was probably named from a town in the north of Ireland, some of its early settlers being Protestants from that vicinity. Before its incorporation it was called Boston Plantation, No. 2.

Coleraine was not settled in Philip's War, but it was often attacked by the French and Indians in what were called the French wars; for, whenever England and France were at war, their colonies were always involved; and the French, of Canada, always contrived to keep the Indians on their side, as the British have done since they conquered Canada and lost the United States.

Green River separates this town from Leyden, on the east, and North River, a branch of the Deerfield, supplies water-power for the factories.

A considerable quantity of wool is produced here, and the manufacture of cotton goods and that of iron are important,

Distance from Greenfield, 9 miles; from Boston, 100.

An Elementary Geography for Massachusetts Children by William Bentley Fowle and Asa Fitz, 1845

Visit Colrain, Massachusetts, USA (Colerain) (Boston Township)
Discover the people who lived there, the places they visited and the stories they shared. 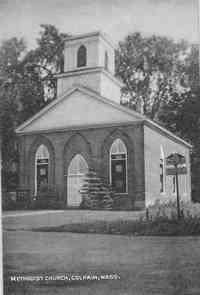